In American Truck I’ve been enjoying a mix of current and old vehicles. Given that a lot of the old vehicles such as the Freightliner FLB were originally in Euro Truck sim, it’s quite amazing that I haven’t really gone down the road of older rigs in that game too. I have recently imported an FLB to Europe but as you see enough of my US FLB in my ATS posts I won’t be covering her in this one.

One of the reasons that I and a lot of the other ETS2 players tend to be driving the ‘in game’ trucks is the volume of options available – seven manufacturers and around 15 possible variants between them. That’s a lot more choice than ATS with four trucks from two manufacturers! However, there aren’t that many older European trucks out there yet. One highly respected mod is for the Scania 113 / 143 range and I shall be trying that out in the future. Closer to my personal favourites is the M.A.N F90 but, as reported before, there are issues with this mod causing damage to trailers (Fifth wheel too close to cabin?). I’ve recently had an enjoyable time with the current Volvo FH16 so I thought I’d give the Volvo F series mod a go.

The F series went into production in 1977. It sold very well because it was tough and had good ergonomics for the driver. The high roof sleeper cab became the Volvo ‘Globetrotter’ – a trademark that is still used today. For the time the engines were powerful too which meant bigger loads could be handled with relative ease. So what did I get and what do I think of this truck?

I stuck with company policy and purchased a 6×4 chassis. The available engines were limited to 385hp and 420hp – I went with the 385. There’s a 12 speed box with the choice of a retarder – I chose to do without. This is a pragmatic choice as retarders were still quite rare in the 1970’s (I can remember them being introduced on buses in the early 1980’s). As there is no engine exhaust braking either, it does mean a different driving style as I will be relying entirely on the brakes and downshifts to slow the truck. It is worth noting that the gearing is long in the upper range because it this a product of a time when trucks were not limited to 90kmh or slower. You can’t use top gear at 70kmh and although 11th is ok at that speed, for a range of revs to play with you probably need to be in tenth. Fuel economy suffers compared with a modern truck as a result.

In appearance this truck is very well modelled both inside and out. It’s fair to say that the only complaint I have about the appearance of the truck is the lack of a front number plate! I believe the creator of the mod is from Iran and I can have as many Iranian number plates as I like 😉 There are choices to include the Iranian Volvo Logo’s too though I have chosen not to on this occasion. I could have opted for the high roof Globetrotter but I’ve gone with the ‘flat-cap’ version. The thing that stands out inside is the size of the steering wheel compared with some more recent trucks – it’s big! The dash is clear and easily read once you’ve identified the instruments. The only thing this truck could do with is an indication of the gear you’re in. On the outside there are no special liveries supplied and I’ve opted for a simple silver metallic which I think sets off this truck really well.

Starting off from Limoges where I bought the truck from the Volvo dealer, I have visited Sweden and Germany but most of the driving has been done in Eastern Europe. This is a brave choice in a truck with no retarder or exhaust brake. Most main routes are single carriageway and I’ve lost count of the number of times I’ve found a car coming at me head-on as they try to overtake a truck going the other way. I did get caught out once and collided with a lady driver going the other way – Her fault and I wasn’t fined but there was minor damage to my truck and the cargo that I have to pay for 😦 But that shouldn’t put anyone off – This truck is a real joy to drive. The handling is good and the engine makes a great sound with a subdued turbo-whistle below the clattering rumble. Here she is… 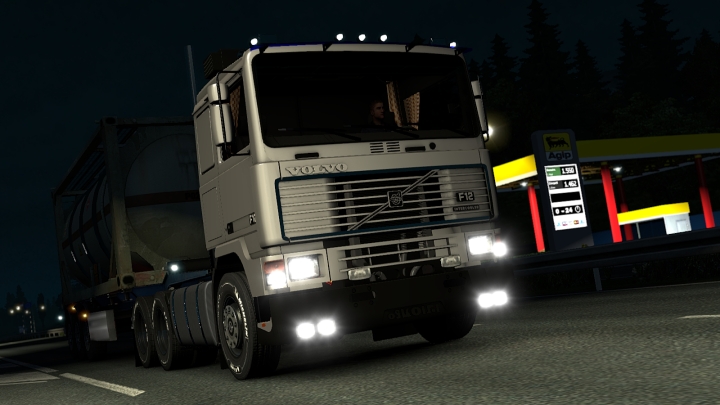 Cutting a dash in the night 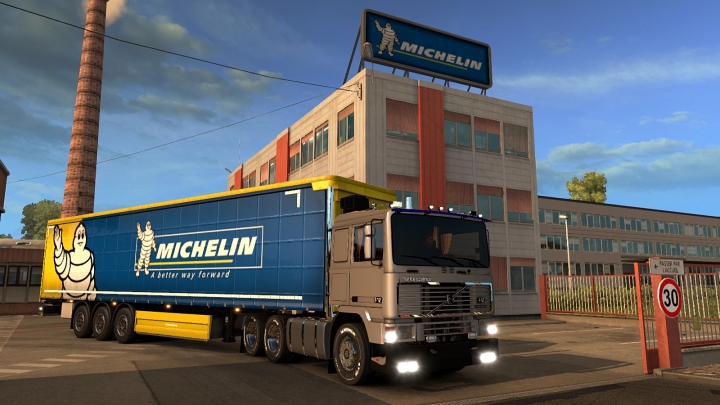 Taking a load of Michelin tyres from Bourges