In my recent New Recruits post I introduced the International 9900i. Now I’ve had a chance to get used to this truck mod I feel it’s time for a review. This mod is a free one that is available for download from a number of sites. It has a number of issues that I will mention. For me these are a mix of glaring errors and minor frustrations that are acceptable in a free mod. But first a few notes about International.

International Harvester was once a very large company with, as the name suggests, strong involvement in the agricultural sector. In addition there were Truck and Engine divisions to the company. Issues for the company began in the early 1960’s when a new range of tractors had to be recalled for defects and a lot of customers were lost to competitors. On the truck side IH offered the Loadstar in the 1960’s, which was the premier medium duty truck in its day. Unfortunately all was not well in the company and through the 1970’s profit margins were small. A new CEO brought to the company in 1979 set out to improve profit margins but succeeded in alienating the workforce. The resulting strike lasted 6 months and coincided with a global recession which effectively destroyed the company. In 1985 the agricultural sections of the company were sold to Tenneco who owned J.I.Case and the Case IH brand was born. As part of the deal with Tenneco, the remaining Truck and Engines division changed name to Navistar International Corporation. The International 9900i is one of their current trucks and is aimed at drivers seeking a traditional look. You can read the full history on Wikipedia and the International Trucks website is also worth a look. Enough of the real world – back to the game!

The external modelling of the truck is very good and captures the prototype’s appearance well. The interior is also very well reproduced but here we find the glaring error. On the outside the truck has a single piece windscreen which is correct for the current version. However, from the driver’s seat we see a central pillar to the windscreen which is more appropriate to a late 1990’s version.

The wooded dash and white backed dials stand out as being different. These are correct for some versions of the truck – I’d guess the premium versions. Unfortunately, the speedo doesn’t read correctly (55mph is closer to 50mph) and the engine revs don’t look quite right either. The fuel gauge doesn’t register full or empty – the needle moving between ¼ and ¾ only – and most of the other gauges do not appear to work. On the right side of the dash, there are some gauges missing although these may have been options. There are also some missing either side of the central display. If that sounds like a litany of complaints, it isn’t for the overall appearance is right and I hope it is only a matter of time before the mod builders correct these defects.

The handling of the truck is really nice with the steering feeling heavy when running slow without a load but lightening once there is some weight behind. The turning circle seems the same as the Peterbilt 389 which is probably about right. The mod provides a good selection of engines and given that from the inside the truck appears like an earlier build, I have fitted the 520hp version of the Cummins 444. This engine makes a wonderful racket thanks to sounds from Kapitan Kriechbaum :-) I did take a look on the web and found a couple of examples of International 9900’s fitted with Cummins engines of this type although the ISX is much more common. As usual for a truck below 600hp I’m using the 13sp Eaton Fuller box. Make no mistake, this mod is worth adding to your truck fleet because it is a really nice drive and it stands out from all those Kenworth’s and Peterbilt’s! Here are some screenshots…

Driver’s office – note the white gauges and central windscreen pillar. The steering wheel attracts disapproval from my Good Lady but having a female passenger doesn’t – work that one out if you can!?

Let me finish with a tale from the late 1970’s when I used to see the oil deliveries in at our place of work. The tanker driver turned up one day in a different truck to his usual Scammell. He seemed a bit unhappy so I asked him what was up? It turned out this substitute truck had an International Harvester engine. This being a family friendly blog I will sum up what he said as “Couldn’t pull the skin off a Rice Pudding!” Perhaps that’s why I went for the Cummins engine 😉 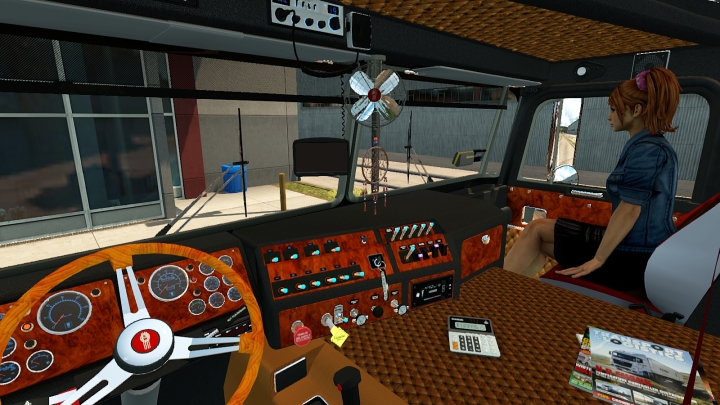 Sometimes it’s nice to have company so it’s great to welcome Megan back 🙂 Oh, and the Playboy mags have been ditched in favour of a Logistics magazine – Must avoid upsetting SWMBO 😉