It’s been a while since I last posted about The Hunter – Call of the Wild. Sometimes it’s good to take a break from a game and sometimes it’s just that we’ve become too involved with a different game. The latter is certainly true of the Oak Glen Farm series that I was posting. In many ways I just wanted to get a play-through from early beginnings in Farming Simulator 19 completed and I think I have now achieved that. So, as that series goes into ‘updates’ mode I find I have some time to get back to hunting.

On returning, I decided it was time to push on with the many story missions in the game. I decided to concentrate on Layton Lakes as I want to find out who was turning over Hope’s camp and tie up some of the other loose ends. There are lots of side missions too and I’ve been knocking out quite a few of them. One example of chained missions from the reserve warden involved Black Bears and culling their numbers. Most recently we had to remove 4 of them. I’ve mentioned in the past that not all bears are black, so while this bear that I shot from a hunting stand using a .44 revolver is the ‘correct’ colour…

…This one, victim of my 6.5mm rifle, is a rather fetching blonde…

As an aside, there was a little bit of friendly banter going on between two of my young trucking colleagues on Twitter, which centred around Masha and the Bear. I couldn’t resist tweeting “Sorry guys, I think I’ve shot the Bear 😉

Of course, while the game is about hunting, there’s always time to enjoy some of your encounters with the wildlife and to breathe in the scenery… 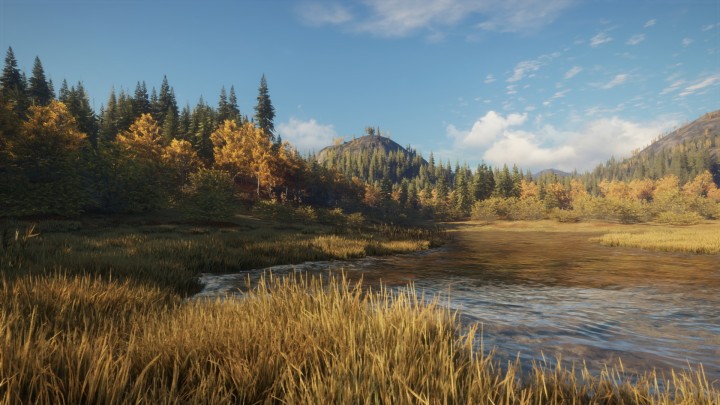 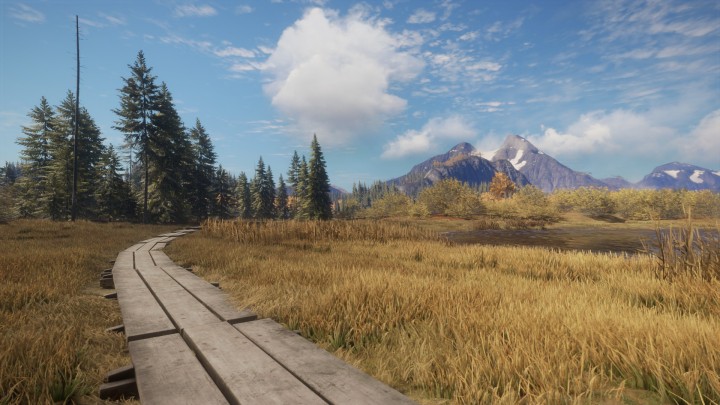 In yesterday’s Trucking Digest I posted a video of one of my shorter drives. I’m going to close this post with a video of a short hunt to bring some life to the game for those of you who have not played it. Unlike most in-game videos that you will find on YouTube, there is no commentary and I haven’t edited anything out to just show shooting action. So we have 30 minutes of hunting around the northern end of Balmont Lake in the early morning. It includes hunting Blacktail Deer with a bow. then there’s an encounter with a Bear – I think we were both surprised and the outcome was probably best for us both! 😉 Then I couldn’t hold the rifle still to shoot a Moose at 100m, normally a shot I’d have no problem with 😦 Finally I redeem myself with two heart shots to complete the hunt…

Well… It seems big changes are afoot in The Hunter – Call of the Wild. There willl be a new animal scoring system that will fundamentally change how your kills are evaluated for your experience points. It is built around some changes to the animal and weapon ranking systems which at least bring a bit of clarity to understanding which weapons can be used on which beasts. No longer will quick kills be important to what your score is but integrity (use of correct weapon and taking a maximum of 2 shots) will be.

I’ve watched YouTube videos from a couple of hunters that play the game and I think the view is that these changes will bring the game significantly closer to what it’s like to really hunt rather than playing a game. It has been suggested that the changes will split the community – with those who really hunt or want to understand real hunting staying whilst those who just play it as a game perhaps move on. So the developers are taking a risky step with this change. It should be noted that the change actually brings this version closer to The Hunter – Classic which was the original on-line game. I believe that was highly popular with real-world hunters.

For someone like myself who falls into the Simulation category of players, any change that makes the game closer to real life is good. So I will be continuing playing. However, with such a fundamental change to how the game works, I will be resetting my profile and starting out anew when this update releases. In fact, I have already reset my proflie and I spent some time today trying out some starting loadouts for hunting in Hirschfelden. The base loadout when you start now comprises the .243 rifle, a 12 gauge shotgun and a .357 revolver – it looks like this… 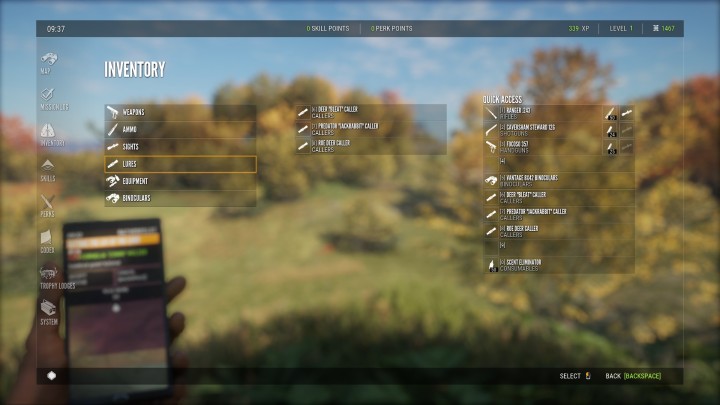 One thing I value a lot is the ability to hunt very quietly – it’s why I normally carry a bow and also why I have been trying out the large bore Air Rifle. My regular readers will know that I do not like the .243 and only normally use it when required to by a mission. I will have access to a couple of Bow’s and also the Vasquez Cyclone as these were included in Weapons Packs that I purchased. The Solokhin MN1890 will also be available to me. This is the first changed loadout that I tried today…

…You’ll note that I replaced the .243 with the Solokhin and brought in the rather nice Orpheus bow. That should cover all basic eventualities. Testing threw up an interesting discovery – the Focoso revolver is actually very good for Foxes. I killed 3 this afternoon with it – one at over 50 metres! That has revised my opinion of the gun and I shall probably continue to carry it in most reserves. However, the limitations of available ammunition types for the bow made me have a rethink about the best no-bang for buck. I reset again and came up with a different loadout – one which takes advantage of the .270 for the likes of Red Deer and Wild Boar whilst keeping the ability to hunt Roe and Fallow Deer almost silently…

…It’s also a lot cheaper to run than using the bow and Solokhin option above.

The highlight of testing the Vasquez Air Rifle was taking down a Fallow Deer from 86 metres away – that’s a pretty good shot for an airgun. For the record, my personal longest shot to quick-kill an animal was 328 metres and the Solokhin holds that – or it did until I reset my profile – I guess I’ll have to repeat that in the future. But for now I think that my second loadout above will be my starting loadout, especially as the changes mean that I will be able to use the Vasquez to take down Foxes – no longer any need for the .223 in that role.

Lets have a quick game of Spot the Fallow Deer… 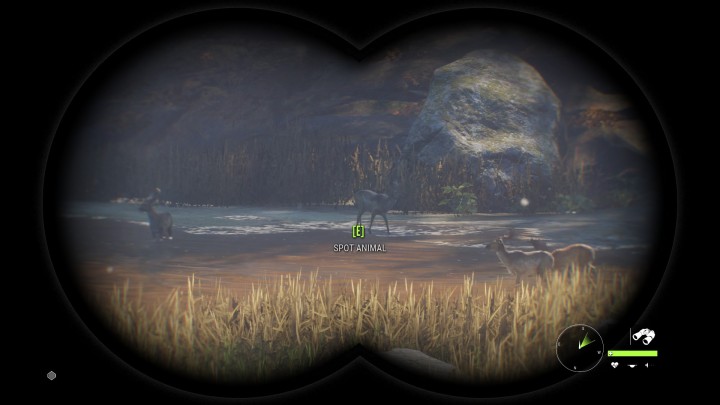 …Drinking in the lake.

Hope you enjoyed those images – till next time 🙂