I’m still not back on the tracks as we try to reduce the risk of spreading Corona Virus. So this response to Cee’s Fun Foto Challenge is archive shots from quite a while ago.

A couple of friends and I visited the railway lines on the Derby-Nottinghamshire border back in 1978. We were there to witness a dying industry though we didn’t know it at the time. The Coalfields in the area were a major industry and the main reason why the railways were built here in the first place. These images were taken near Tibshelf on the Erewash Valley line before the collieries closed in the 1980’s. In both photos we see Class 20’s being used as prime motive power for stock being moved back to Tibshelf sidings in preparation for the next week’s work. These locomotives, operating in pairs, formed the backbone of much of the freight traffic in the area at the time because their combined 2000HP and low axle weight meant they could go anywhere, even on poorly maintained tracks.

In this shot, 20173+20068 arrive at Tibshelf Sidings with a train of empty mineral wagons. They will continue under the bridge before setting back into the sidings which are visible on the right behind the semaphore signals. The tracks on the left are the main line from Sheffield. Tibshelf Sidings, along with Blackwell Sidings and Westhouses Depot served the many collieries in the area. 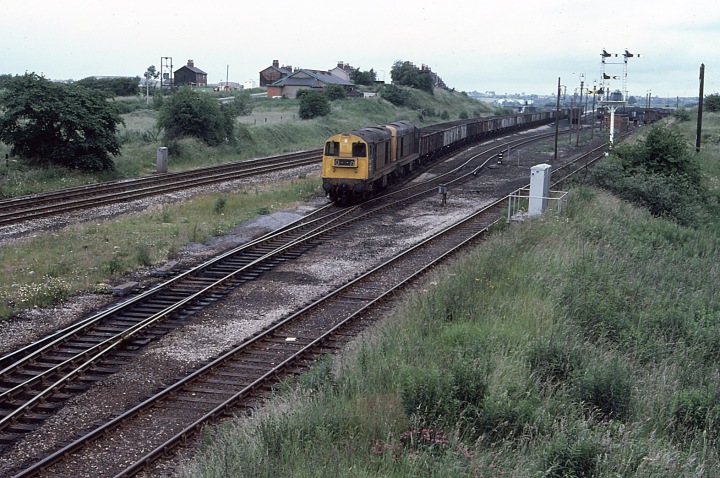 Here, another pair of 20’s come off the Alfreton-Sheffield main line as they approach Tibshelf Sidings with another rake of empty mineral wagons. The line to Blackwell Sidings from Blackwell South Junction is visible on the left. On the top left are wagons in the private siding of Alfreton Explosives’ Rough Close Works. With the closure of the collieries in the 1980’s the Blackwell Branch closed and the tracks have been lifted…