…Cultivating another farmer’s field to make a bit of money on the side. I now have a fuller understanding of how the Seasons mod works, at least in terms of basic arable farming. If you use the default settings of nine days per season, each in-game day (real world time) equates to around 10 farming days. You can do a lot in that time! Let me take you through some of what I have doing in my first farming day on the Six Ashes map.

I set out to completely prepare my field for sowing, including the first stage of fertilizing. I think now that that I could have spread the work out rather than doing it all in one game day – fertilizing could have waited until the next week – ie next irl game day or even the one after! The upshot is that I am ready to sow but soil temperatures are too low for reliable germination of the seeds. I also bought more fertilizer than I needed (I filled up the spreader!) – so I’ve got around 5000l sitting around. That’s not a disaster – I’m just waiting for a fertilizing job on a neighbouring farm. But in the first week of March all the jobs are plowing or cultivating…

…With an occasional transport job thrown in. Doing plowing for other farmers allows me to try out some of the larger equipment like this Lemken Titan 18…

…It is a pig to line up for each cut because the tow bar is on a swivel and I think that the time lost positioning it outweighs any gain from a slightly wider cut. That all the jobs reflect the time of year is a good thing – it brings realism. I’m expecting jobs to sow or plant as the weather turns warmer and, when autumn comes, harvesting jobs. In between I’m sure there will be weeding and fertilizing to be done. In fact, I’ve already got my first patches of weeds…

…They popped up while I was doing my lime spreading! A look at the map shows them dotted around in every crop field… 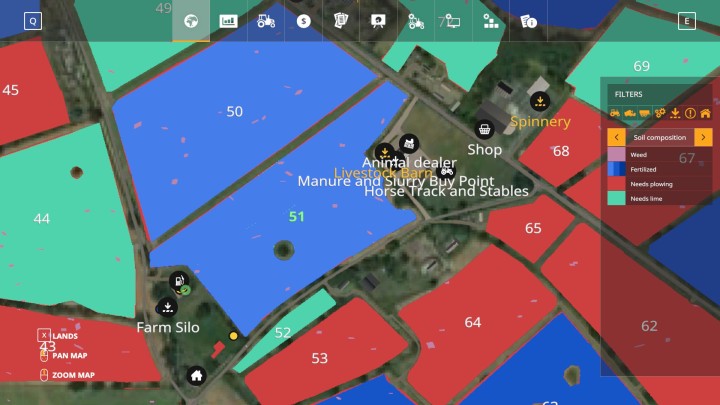 I have mentioned soil temperatures being too low – Seasons brings much more realistic weather and crop growth. If you glance back to the shot of the weeds in my limed field you can see a number of icons at the top of the screen. The second from the left shows the air temperature and, below that, the ground temperature. I can open up the seasons menu of sowing and harvesting periods, and check what temperatures are needed for each crop to germinate… 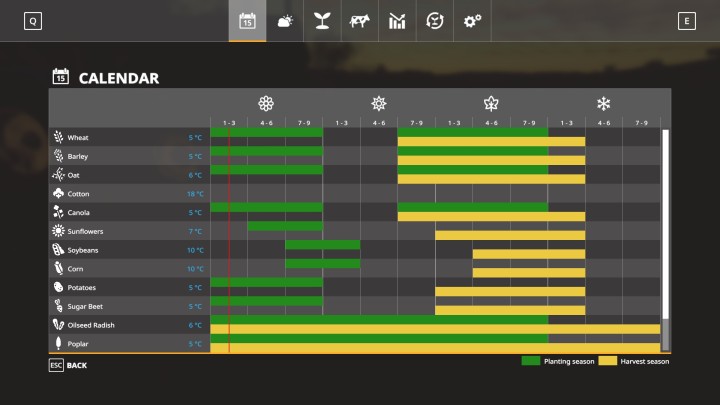 …looks like it’s going to get colder and we may have rain on Wednesday! I may be able to sow on Thursday but Sunday is currently looking better 🙂 In Seasons time those days equate to early-April and early-May. I’d probably prefer to get my crop in the ground in April if possible. Like the real world, the weather forecast may not be totally accurate – it might be possible to sow on Friday despite rain being forecast (which would be mid-April). Then, once the crop is in the ground I’ll be checking how well it can handle what the weather is throwing at it. There’s a chart for that too…

…I’ll let you read that one for yourselves!

As you can see, Seasons brings a lot more to the game than bare trees 😉 There’s a lot more thought and planning required – all of which may come to nought if there’s a bad drought over summer or if it rains and prevents harvesting the crop before it withers. Much more realistic 🙂 There’s more I could tell you about but this post is already long so it will wait for another day. To close I’ll share a shot with you of how our previous farm, Oak Glen, would have looked in early spring…

We’re pressing on – maybe that’s the wrong term as we’re not growing grapes? But we are chasing around trying to keep our head above the crops and build our bank balance. Before expanding field 4, I needed to take down a couple more trees. That was accomplished quickly. Here’s the stump-grinder in action, removing the last remnants of them…

…I hate chopping down trees, so I’m glad that is over and done. I have planted a tree in a gap between the others that I left to form a field boundary.

Tragically, I have a real world equivalent that I’m currently dealing with. As a result of a series of dry summers, our Rowan tree is causing structural damage by taking all of the water from the soil under the house. That means it will have to be felled. I spoke to a tree surgeon earlier today and he will be coming on Sunday to check out the tree and give me a quote. It feels like I’m murdering a member of the family and I am more than a little fed up with the world at present 😦

I knuckled down and prepared the field opposite the farm. I couldn’t believe that it needed Lime – that means we’ve had 3 crops from that field and in game terms for me I believe that is a first! Never stuck with a farm-sim save so long – says that this map has given the sense of involvement I need to really enjoy the game! So I spread the Lime…

…Harrowed the ground to cultivate, fertilized it and sowed a crop of Soy Beans. I’ll add those to my existing harvest sitting in the silo at the farm before selling.

…Now that field is ready to be ploughed and expanded into the newly opened up areas. But that raises another dilema for me; I had planned to sow grass and continue to use the field to produce silage, but I’m also looking at this field as another for crop production. It really is a difficult choice because when you put the costs behind growing crops against the simple fertilize-harvest cycle of a grass silage field, there is very little to choose profit-wise. I may decide to do a crop here first and sow 14 East with Grass to see how that costs in.

…and then baling the Straw which I sold to the Stables…

So now I have £260k in the bank and I can afford that more powerful tractor to handle ploughing and some of the heavier jobs that the Fendt needs a rest from. I’ve narrowed it down to 3 contenders. The Massey-Ferguson 7726 at 280HP… 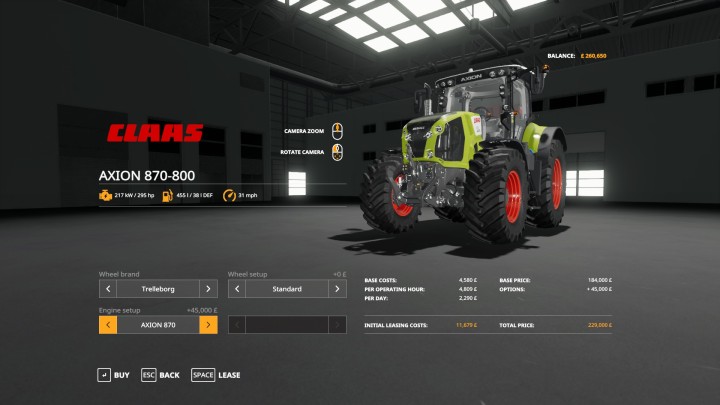 …Each will allow me to use a slightly wider plough – .5 of a metre wider.. Whoopy-Do!! But whichever I choose to buy, it’ll spread the load, allowing the Fendt to remain in use along with the Massey 3090. Anyone out there want to suggest which I should go for?