When I visited Zimbabwe after meeting my Wife I stayed on my Mother-in-Law’s farm. Each day I found myself involved in the day-to-day activities of the farm and got to know several of the workers personally. The initial barriers of being the Son-in-Law were broken down by my willingness to get involved in the activities that the workers were required to do. It gave me an understanding of the difference between their lives and my own – between semi-mechanised arable farming and getting hi-tech telecomms services delivered to major businesses, between living in a suburban street and living in a circular mud hut. Their life was so much physically harder than mine but I suspect that mine was significantly more stressful with responsibilities that they did not have. The hardest thing I had to overcome was getting them to understand, “I’m not Boss… I’m Martin”

Sadly, AIDS is rife in southern Africa and I know that several of the people in these images have passed on in the years since they were taken. 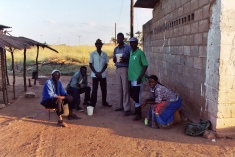 Socialising at the end of the day 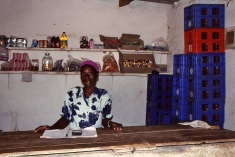 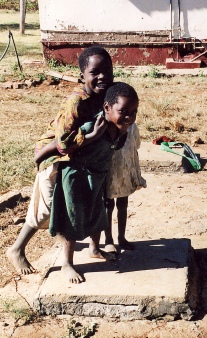 You can read about the Weekly Photo Challenge at http://dailypost.wordpress.com/dp_photo_challenge/humanity/

Who digs here now?
Where once dug we
To shelter from the hail
Of shells and bullets
The evil intent
Of the unknown soldier
In yonder trench

Who digs here now?
Do you come to learn?
Of how we lived
In desperate times
The unknown soldiers
Beneath the soil
of a foreign field

Who digs here now?
To what end?
One hundred years of sleep
For the first to pass
Never home to come
Those destined to become
The unknown soldier – we all are one

Author’s note:-
Around 200,000 dead soldiers from WWI were either never identified or not even found. Each year new human remains are turned up by farmers or archaeologists working where the battles took place and very occasionally there is enough to identify an individual and return them to their family. But many will never have a name and all are recalled by the Unknown Soldier tombs in the countries involved.