Today we’re going to take a trip from Mannheim to Amsterdam in our white DAF XF named ‘Lady Galadriel’. In terms of the route within Euro Truck Simulator 2, this entails driving mostly on the older map builds although there is a section within Germany where we encounter the updated map with improved quality and realism. I have recently re-enabled a mod to improve the traffic realism, so you will see more ai vehicles. If you watch closely, quite early on, there has been an accident on the opposite carriageway and later there is a car that has clearly spun!

Lets talk interiors. In my US trucks the ostentation is most commonly chrome and paint although I often have a dreamcatcher or something else as a hanging ornament. In Europe it’s more likely that there will be interior hangings. For my in-game trucks, they can be a reminder of the past activities. So, the right-hand pennant on the windscreen in ‘Lady Galadriel’ is a Turkish Tourist Board advert whilst on the dash itself you can see a Turkish flag. This is a reminder that she was the truck that did the ‘Orient Express’ achievement, driving from Paris to Istanbul along the route of the famous train. Other trucks in my fleet also have reminders of their achievements. The Home Trucker hanging is a reminder that we’re still following Covid-19 guidelines and should act appropriately – several of my trucks in Europe and the US carry that one.

This video is 38 minutes in length. If you can stay with it until I make a fuel-stop roughly midway, you will see the improved maps and be able to compare with the earlier version (most noticable at intersections). You’ll also experience some unpleasant weather. A bit later on we’ll cross the Rhine on the Rodenkirchener Brücke with a glimpse of Köln to the north. If you have the extreme fortitude to stay with me until we arrive in Amsterdam you’ll be rewarded with a very nice sunset 🙂

If you’re out on the roads, drive safe. If you’re in the US braving either Fire or Flood – again, stay safe!

Plans are always likely to become victims of events. At least in Farming Simulator 19 it’s more driven by realisation of a potential opportunity than by circumstances beyond your control. That said, if it wasn’t for taking the decision to go for Pigs on the farm early, I wouldn’t have pushed myself into the current situation. When I last posted I’d just got the pigs and I was planning to diversify into Sugar Beet as a crop. For that I knew I’d need to spend around £120k to buy the necessary harvesting equipment but I recognised it as a necessity if I was going to get the best out of our porky friends. I’d taken the decision that Alehouse Field was best suited to handle this crop as I would have to plough every time I grew Beet or Corn.

I quickly built up a good amount of money with some successful harvests so that I could afford to get the tractor driven root-crop harvester, the Grimme Rootster and its associated top removal tool. It’s a bit of a beast…

…and I’ve had to shuffle some other equipment around to house it! I bought it because I had the money available. That was a little early and may have been an error – after all, I still had a crop of Canola in the intended field to fertilize and eventually harvest. I found myself with only £30k in the bank and a lot of essential things to do before my next crop income would be available.

As you would expect, I struggled through the bad times, got some harvests done and sold things like eggs to get the balance back on an upward trajectory. This time, silage wasn’t coming to my aid 😦 But I did some delivery work… 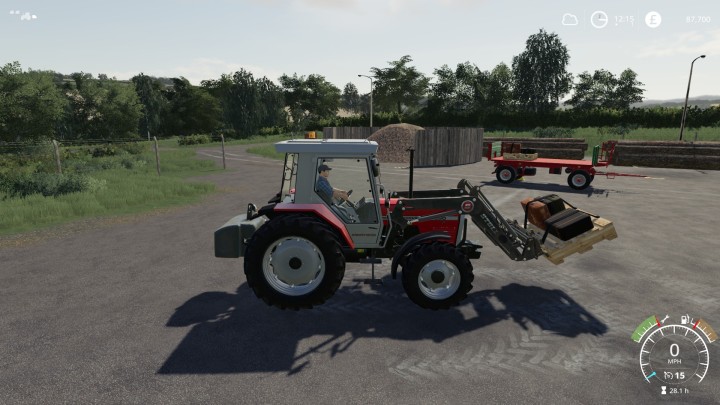 …and also a harvest for another farmer…

Then it was back to my own fields. I hit some problems harvesting the Canola in Alehouse Field – the harvester cut out on me on several occasions resulting in a small amount of crop loss. The cause of this appears to be the sharp gradient changes at the edge of the field. Also, in this field that I created myself from one of the grass fields, I have noticed some invisible artifacts that may be coming into play now – they are hidden but when I was looking at possibly placing a sheep pen in this field I found some places where I couldn’t put it because of existing ‘structures’. You can see a number of unusual dips in the field too… 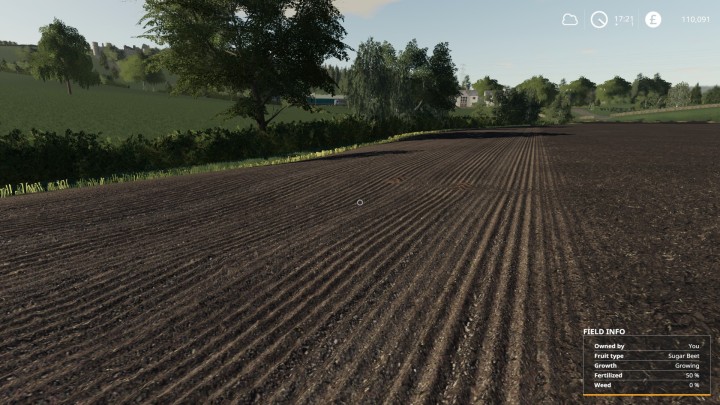 …roughly where those structures appear to be. Perhaps we need an archaeoligical dig to ascertain whether I’ve found a Roman Villa? 😉 Anyway, to combat some of the issues when harvesting I’ve chosen to leave some of the more troubled areas un-cultivated… 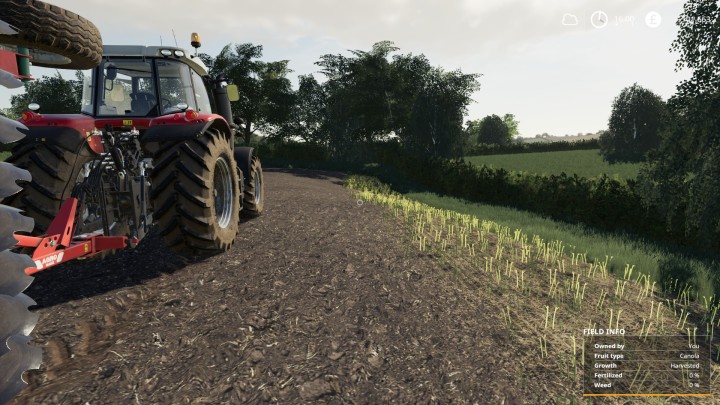 …so the yield from Alehouse field will be slightly reduced in future. I’ve now sown it with Sugar Beet.

The voracious appetite of the pigs (I have 12 of them now!) has raised the question of how I’m going to make a money from crops when they are consuming quite a high percentage of anything I grow other than Oats and Grass. I think that the time is upon us to buy another, larger field. The only problem with that is the cost. Almost all of the fields that are under cultivation at my end of the map cost in excess of £300k. While I was harvesting the crop in field 27 I took a look at field 47 opposite. You can see both on the right of the map…

…Field 47 is probably a third bigger than my current largest. It’s the only field at a reasonable distance from my farm that costs under £200k – but only just under 😦 It has a mound with trees which will make it a little tricky to farm…

…quite possibly a tumulus or barrow, so I won’t be disturbing that! I think that is our only viable option currently but I will need to earn well from some crops to be able to afford it. Oh for another Silage price rise!

Those who looked closely at the green areas of the map will have noted that I appear to own the large field to the north of Field 47 – it was part of the ‘spare’ land that you can buy for £0 and which I bought to allow me to expand Field 4 into what I now call Spinney Field. Why don’t I use that? Firstly, there’s no direct access without driving across other fields. There is a hedge all around the field with the exception of a gate at the boundary with Field 31…

…It doesn’t open! The implication is that the map designer does not wish us to use that field and I’m going to abide by their wishes.

That’s brought you up to date. Now I’d better get back in the tractor and do some work – that field isn’t going to buy itself!