Lots of work being done on the farm and a couple of unintended purchases see my working balance stable at around £110k. The first of these purchases was a weeder – the Einbock Aerostar-Rotation 1200, which as you might guess clears a 12m swathe of weeds at a time. Early in game I chose to do my weed removal using the Hardi sprayer that I have shared images of in action. The reason for choosing to buy that first was the nature of weeds – the pesky varmints can show up on your fields at any stage of crop growth and herbicide can be used to remove them at any time. A Weeder however can only be used before the crops get to their second growth stage so if you can only afford one means of dealing with weeds, herbicide is the way to go. With stable income now assured on my farm, I can afford to add a weeder and that in turn means I can take jobs from other farmers that specify using a weeder. Here it is unfolding for just such a job for Mason in field 36… 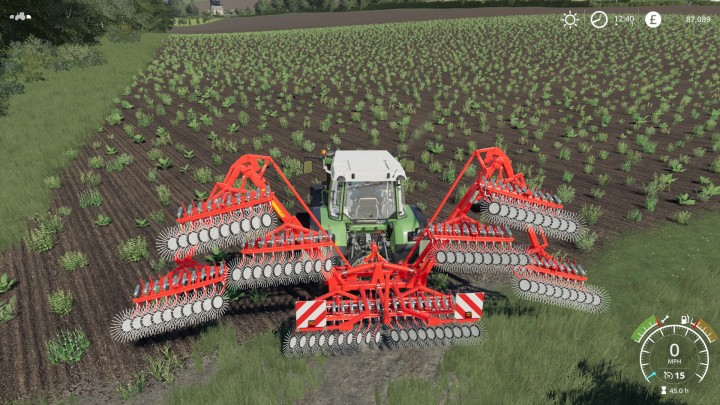 …and ripping out the weeds…

…The weeder requires 130HP, so the Fendt Favorit will handle it. Job finished and weeder folded up I head back across Field 13 and I can see that my crops in 14 are ready to be harvested… 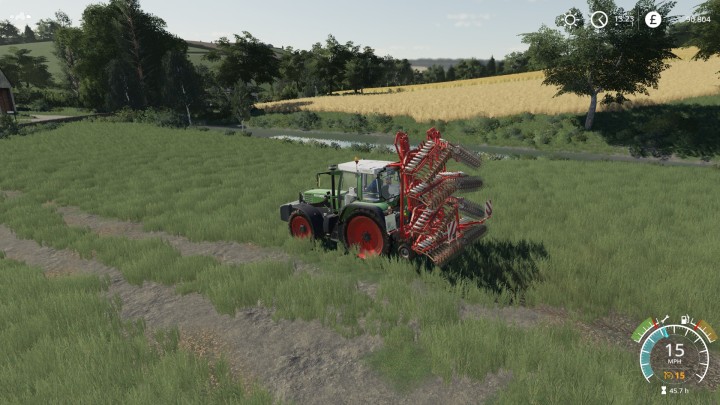 …So that’s going to be my next task.

…but the price wasn’t as good as I would like so that went to the Silo at the farm to be sold when things improve. 14E produced just over 13000l of Wheat, most of which went straight to Empire Stores for a good price with a small quantity held back to feed the Chickens – overall profit from that field, including the straw collected after harvesting, was over £16k. The Oats in Field 4 were also ready and, again including straw, returned over £10k. This was a very good return from a small field but the harvesting was very tricky with such an irregular edge, so I have decided to return that field to grass for hay and silage production. To that end I prioritised, fertilizing, cultivating and sowing field 4 before working on any of the others. Here we are in Field 4 – the sowing is complete…

…that’s field 36, where we were weeding earlier, beyond the hedge. I limed both the fields in plot 14 and harrowed the lime in ready for fertilizing. Lime is an expensive necessity that fortunately only has to be done every 3 harvests. That was the end of my in-game day. Early to bed for an early start harvesting our original field next day.

Sun up and back to work…

..harvesting the Barley crop. This produced a huge amount of straw – 21 bales. I decided that I really needed to cut back on the number of journeys when I do have a lot of bales to shift. So that other new purchase mentioned at the start was the Anderson RBM 2000. This cost £50k but I was able to get £26k back on the Ursus T-127 bale trailer so the net cost was £24k. It’s a great bit of kit capable of carrying 24 bales at a time. Here we are collecting the straw bales after the harvest…

…and loaded up ready to take them for sale…

…That’s 6K earnt from something I don’t have a use for 🙂 Last task for this post was fertilizing the plot 14 fields ready for our next crops. I was able to tie that in with fertilizing field 36 for Mason which earned me over £8k after buying some fertilizer. Looks like he has a good crop of corn growing there – a harvesting contract for that could be a good excuse for me to buy a corn header 😉 Something to think about. And I need to think about another field to buy – Field 13 could be back on the agenda 🙂