It’s been a busy weekend down on the farm. Since the last post I have ploughed field 14 East to prepare it for a crop. That took me quite late into the evening, so I stopped for the night. I was up before the lark next morning and finding the price being offered for silage bales over at Oakfield farm was still £362 per 1000l, I drove off into the still-dark with my loaded trailer and claimed another £11614… 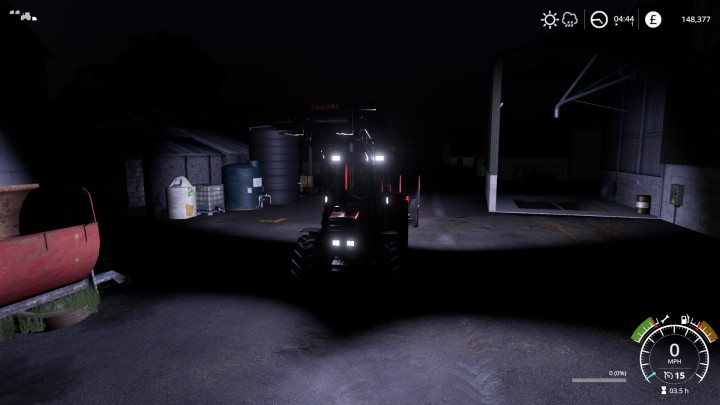 I saw the weather forecast and it didn’t look good for later in the day – rain expected. The wet weather was expected to start around 10am. The only thing I could do on my own farm was continue with field preparation. But neighbouring farmer, Paul, needed help with harvesting his Canola crop so I took his contract and headed off into the gloom in the New Holland…

…Paul’s field is up the side of the valley to the southeast and I had the devil of a job finding the track for access, but I got there in the end. It was going to have to be a quick job if we were to beat the rain. As if to confirm that, the valley was looking hazy as I emptied the first cut into the trailer…

The crop produced over 34000l of Canola – I delivered 2 trailer loads to Hill Top Stores at which point Paul said he was happy. The Contract was complete and I collected my pay and my third of the crop value – a total of £14561. There was a little surprise bonus – I still had over 4000l of canola in the harvester. With the contract complete that becomes mine! I combined it with the Canola I already had in my silo and sold the lot for another £8k.

Back to my fields and I spread Lime on 14 East before hooking up the disc harrow to work it in. Then I took the harrow round to my original field to cultivate that too. At around 10:15, the rains came…

…I completed the harrowing and went back to the farm. The rain limits what you can do – harvesting is out of the question and you can forget mowing and baling work too. I checked the price of silage and it was still just above £350 so I took another load of bales up to Oakfield Farm and earned a slightly reduced £11214.

Then I set off to 14 East with the seeder. I had planned to plant Wheat but when I got there I saw the Soy Beans in 14 West had matured and were in the first stage of harvest readiness…

…With the rain teeming down and no sign of let-up in the forecast, it looks like I may not get to harvest that crop at all. So I planted Soy Beans in 14 East too in the hope that the rain will have moved on by the time that crop ripens. It looks like I saved Paul’s crop but lost my own 😦

After seeding 14 East, I saw that Mason had a contract to sow Barley in field 36 which is just the other side of the river. I took that job but had to get a helper to do part of it while I went to the shop to get some more seed. Offering £14k, after buying the seed and a short hire of a helper, I made just over £9k. The rain doesn’t stop you seeding – it just makes the tractor and seeder more muddy than usual.

Mason mentioned that he has a weed infestation up in field 27 that needs a dose of herbicide He asked if I’d like to take that job too? I’m thinking about it over a Farmer strength Tea 🙂 And I’ve put out my own contract – on anyone seen doing a rain dance in the local area! At this moment in time the bank balance looks a bit more healthy at just over £190k.