After my last post I have been watching the debate about the scoring changes within the community with interest. Most of that debate has been among the real world hunters and centres around the lack of penalty in the scoring for each animal that a hunter downs in the Open Beta. Removing the artificial 8 seconds Quick Kill is seen as a good thing in that even a good ‘ethical’ shot will not bring down some animal species within that time limit. The issue as seen by quite a few is that with no penalty the game becomes more of an arcade game than a simulation. With no penalty a player can go around taking shots to the intestine region of an animal, for example, and know that they will get the full trophy score in the game because a ‘gut-shot’ animal will always die. In the real world such behaviour would be cruel to the animal and is viewed as unethical and shows the hunter as lacking integrity.

The Hunter’s developers have built up a good relationship with their community over the years – perhaps not quite as good as the one SCS have with their truckers but definitely one in which the developers listen to what the community has to say. So, after the first period of Open Beta testing, the developers have moved to reintroduce a form of penalty for poorly placed shots. Initially there were three checks at the point of harvest – correct weapon and ammunition for the animal class, no more than two shots and intact trophy organs (usually the animal’s skull and horns). The fix is a fourth check on whether the hunter hit the animal in a vital organ – Heart, lungs, stomach or liver. This gives a little bit more leeway than in the real world where a good ethical shot would be to the lungs/heart – Here’s an example of an ethical shot that would give a full trophy rating in the new scoring system (shown in the current live harvest screen)… 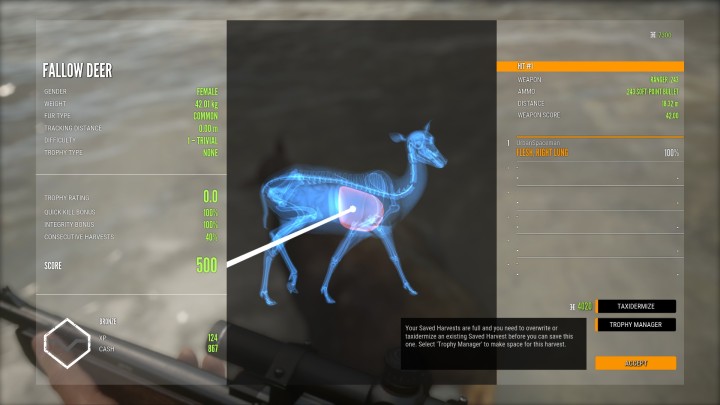 …But the game has to have some compromise to allow for the variations in computing equipment being used by gamers.

Of course, I wish all my shots hit in the correct place! I do usually get it right but it’s sometimes possible to get caught out by an animal’s behaviour or to misread the wind. I lined up a shot on a Roe Deer today with my bow. At the very instant that I released the arrow the animal turned 😦 If I had been using a rifle the shot would probably have been further back from the lungs – possibly stomach or intestines, but because I was using the slower projectile, my shot hit the animal in the upper thigh just below the hip. The deer ran off and I had to track it to find where it finally succumbed to the loss of blood – not too far thank goodness. So even with the best intentions, all of us will sometimes have a bad shot. The game will penalise us with a reduced trophy score – in the real world our conscience would be asking why we took the shot at that exact moment and could we have done anything different to achieve the ethical shot with minimum suffering. Actually, I even do that in game!

Apart from the changes to the way that trophy scoring is calculated, the new weapons and animal classes charts have also seen some changes during the period of Open Beta. There has been some more refinement of the levels for certain weapons and tweaks to the ammunition. Perhaps the most important changes are to the 7.62 ammo used by the Solokhin. This is now a class 3-7 weapon and therefore can’t be used on Coyotes like before. In some ways it could cease to be the ‘go to’ general weapon because the .223 has been beefed up slightly to cover animals in class 2-4. That means the .223 is no longer just a Red Fox killer and much more viable as part of a loadout which, with the 7mm or 30-06, could handle almost everything! Here’s the current charts… 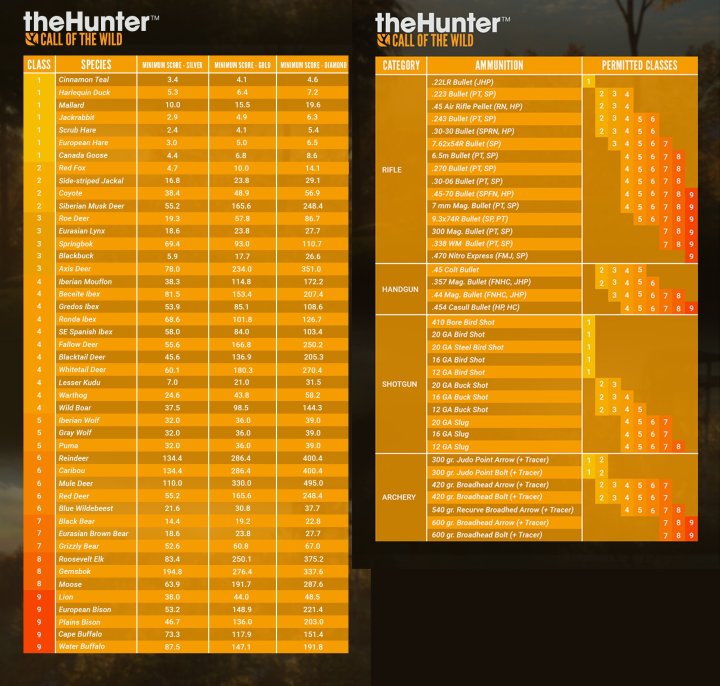 …No doubt there will be some more refinements before this change goes live but currently it looks to be a great improvement to the game. I think we shall have to wait a while yet before it finally drops…