May I begin this post by wishing you all a Happy New Year! I’ve had a nice relaxing start to 2020 with an hour of fishing on Mudwater River. It’s a very pleasant way to start the day 🙂

This was actually a continuation of a fishing visit that I started yesterday. I’m here for 2 reasons – 1, to make some money after I splashed out on a Kayak and 2, to try and catch a unique Spotted Gar and a trophy Freshwater Drum. Both rods are equipped with sinker tackle. The one on the left is set up for Drum with Nightcrawler (Earthworm) as bait on a 6lb line. I can’t be guaranteed Drum as the only catch on that rod – Nightcrawlers will attract small Bass and Catfish that feed on the bottom. I have cast the line to where that green and white marker is – a place I’ve marked as good for Drum after some trial and error fishing over several visits. The marker is only visible to me – other anglers in the same session won’t see it. The rod on the right is set up for Gar and baited with Medium Cutbait – basically chopped up bits of fish – on an 8lb line. I could use Minnows or Shiners as bait but then I’ll also be attracting the local Pickerel population and I specifically want Gar. The only other fish that might be interested is Bowfin but I normally find them in different parts of the river. I have cast to a place midway between the two closest dead branches. The river bed drops sharply there from 1ft to 3ft and predators like to hang around in the dip waiting for unsuspecting small fish to swim over the edge.

How did our fishing go? Well, I didn’t get the trophy or unique fish I was hoping for but I reeled in several nice examples of both Drum and Gar and some baby Bass and a couple of Catfish. Here I’m having a fight with a 5.5lb Catfish…

…which was successfully landed… 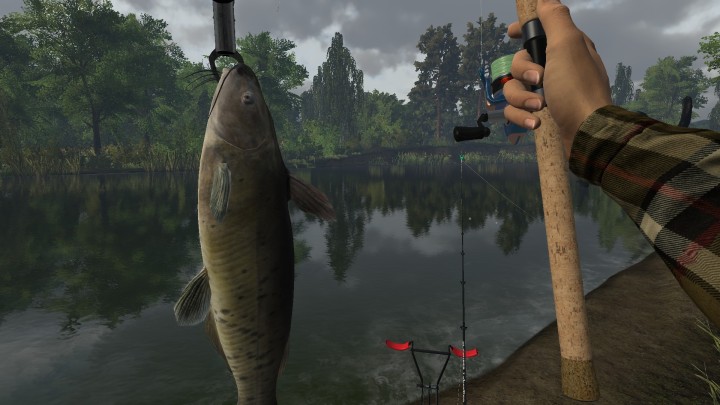 …and here’s an average sized Drum…

…In real world Gar fishing you have to use special line and mind your fingers when you catch one! You don’t have to use sinker tackle for either of these fish types, it just seems to be the most effective method for me. I have caught both types of fish using spinners in the past and I have also caught Drum using a float set-up and Red Worm – but that’s very hit or miss.

A couple of other recent purchases for me have been Topwater lures – I have used these in the free-to-play game before but have only recently reached the required skill level to be able to buy them in this version of the game. These are specifically aimed at catching predators and once you’ve mastered the technique for each type they’re very effective. Here’s a Popper resembling a Fish…

..complete with hooked Chain Pickerel 🙂 And here’s some of the available Topwater Lures in the shop. I chose the Frog Walker on the left…

… and it’s already paid for itself in Chain Pickerel, Grass Pickerel and Northern Pike 🙂