I’ve made a number of changes in the way I play The Hunter – Call of the Wild. These are moves towards a more realistic hunt as I’ve now reached a level of knowledge within the game that allows me to go without the props that are there to help the player. I have turned off the highlighting of animal tracks – which means I have to find them mainly by observation as I move around. I’ve also turned off other aids like the indicators of animal calls. One interesting effect of the latter is that the calls suddenly seem louder but I think that’s just me concentrating harder. I have turned on the requirement to manually chamber the rounds before firing. I’ve dispensed with the backpack, which limits how much equipment I can carry, so I’ve had to choose carefully what I take with me based on the animals I expect to encounter. One other change which is not realism related – I’m hunting without a scope on my rifle. That’s because I was doing a challenge recently that required me to hunt without one. Some things I can’t turn off – like the ‘e to examine’ in-game messages. I’ve left on the head-up display in the bottom right of the screen because it only contains info you’d have anyway in real life like wind direction and the zero-setting of your sights. So, today, I’m going to take you with me on a hunt in Hirschfelden. 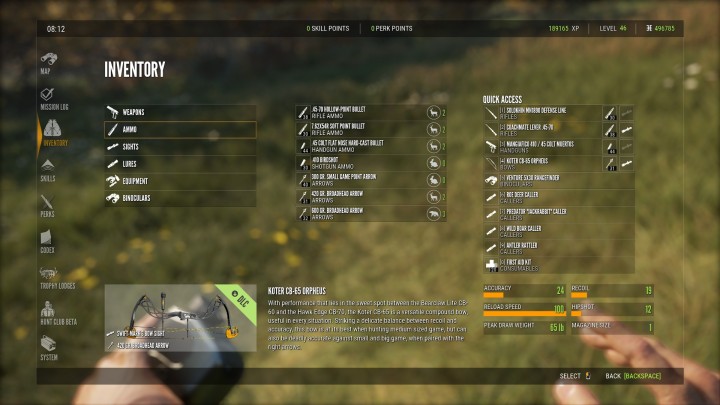 …I’ve chosen the Solokhin as a good all-round rifle. The Coachmate 45-70 is there in case I bump into Wild Boar where its power at short range will be invaluable. I have the Muertos 45 handgun which can take down Roe Deer at short range. And finally, I have a bow which I carry because it is very versatile – three different weights of arrow allow it to be used successfully against animals from Fox right up to Red Deer. 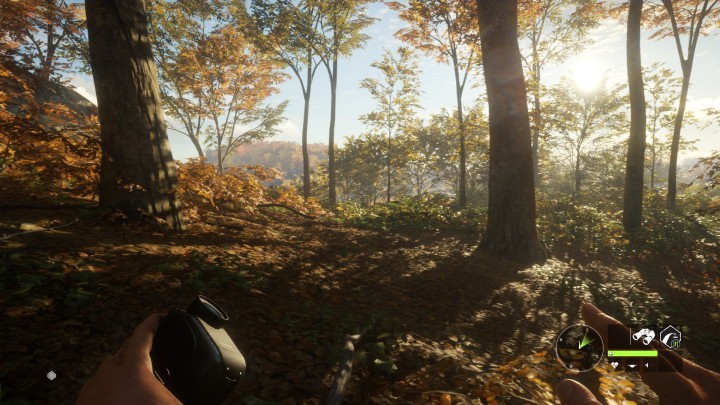 …once through the trees and crouched on the edge of the undergrowth, I had my first sighting of the day. It was a Fox but she was walking away from me and as I had the wrong weight arrow selected I let her go. You can see her track through the grass in this screenshot… 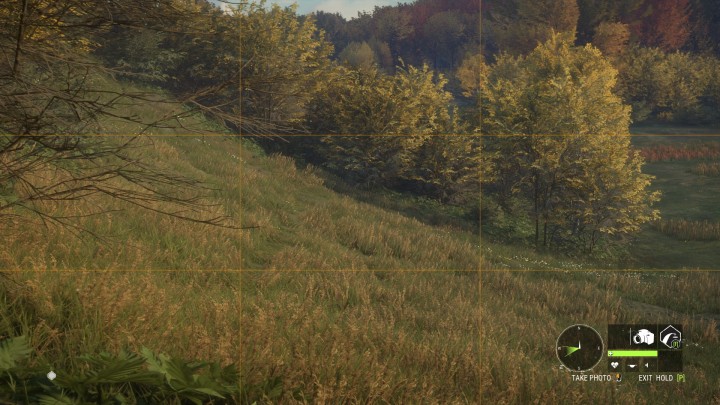 …around the same time I heard some movement in the trees behind me. That could be cause for concern as you can’t be sure what animal is making the sound but here in Schonfeldt it’s almost certainly a Roe or a Fallow Deer. I saw two Fallow Deer crossing a field in the distance at around 200m and took a speculative shot at one of them – missed (with the scope on I would almost certainly have hit!). That frightened the animal behind me and away it ran.

I retraced my steps back into the trees and looked for tracks which I quickly found. Following them, I was led down the hill towards Schonfeldt Barn. My suspicions were confirmed – it was a female Roe Deer. Here are her tracks, left as she bounded away down the hill… 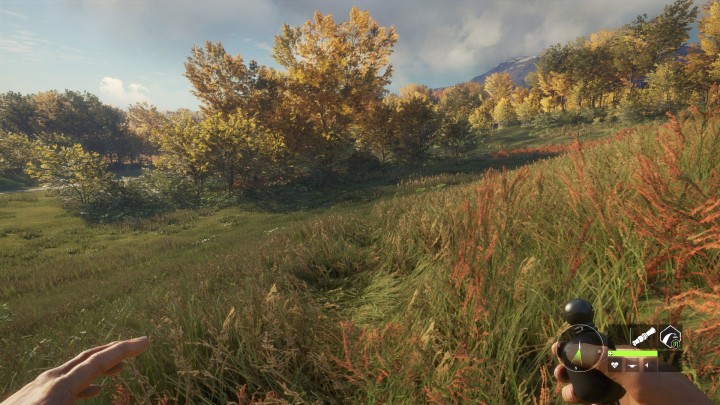 …I have my Roe caller in my hand because I was hoping I might lure her back but after waiting a few minutes, it was clear that she was long gone. I continued down the hill and found some tracks that crossed the one I was following… 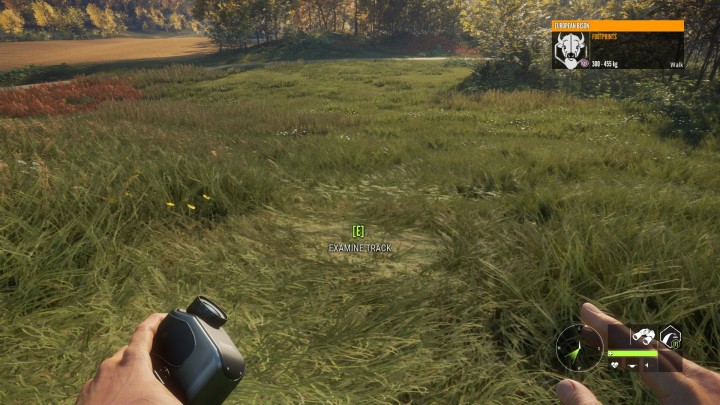 …European Bison – Now that’s a surprise! While they frequent the area to the north of here, I don’t recall finding their tracks hereabouts before. I guess they passed through during the night. I’m not equipped to take one of them on although the 600gm arrows might be capable at close range and I have finished one off in the past with the handgun I’m carrying at the expense of getting wounded myself. I continued down through the trees ahead and as I came out of them saw a Fallow Deer at around the same time it saw me – it was off in a flash, running towards the fields.

Deer are strange creatures. Sometimes their curiosity overcomes their initial fear. I crept along the side of the barn until I had a view of field where the Fallow had gone. Lo and behold, there he was coming back cautiously through the boundary hedge… 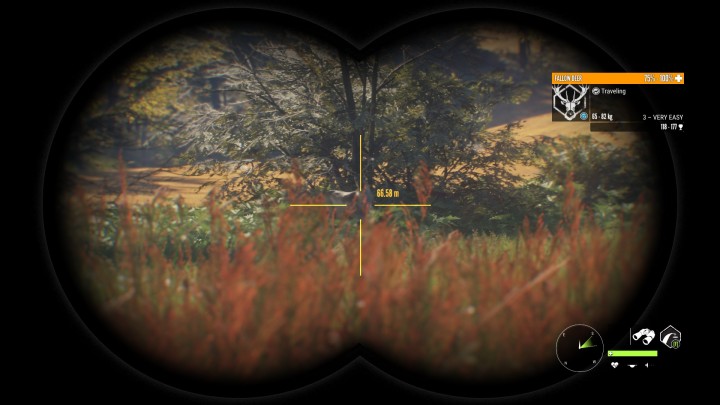 …Since he decided to obligingly stop and stare, I shot him with the Solokhin. He spun around and ran back towards the field but I knew he wouldn’t get very far. Making my way to the scene of the shooting , this blood spatter was evidence of a serious hit to at least one lung… 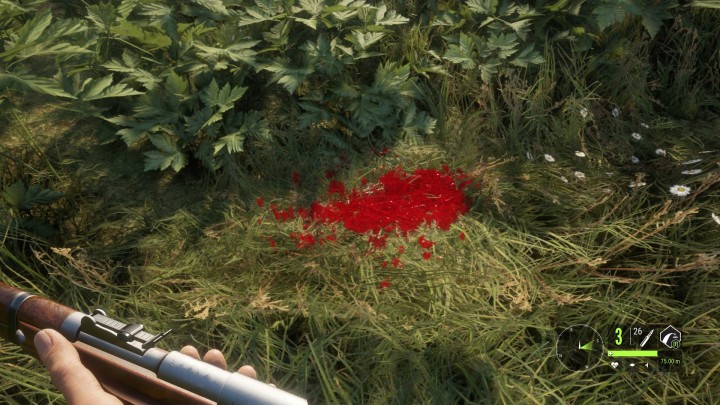 …and I found him just the other side of the hedge. This is the in-game report detailing the damage done by my soft-point 7.62 bullet… 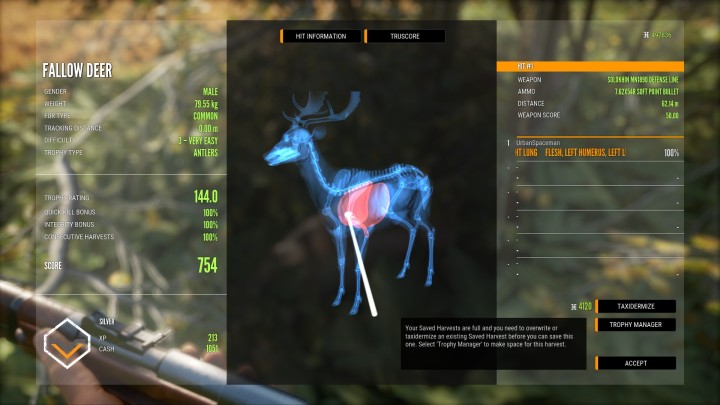 …The bullet hit humerus before puncturing both lungs – no wonder he only made a few steps. It’s a sobering thought that this rifle was in use with armies in Europe and the USA from its introduction in 1890 right through to WWII – a devastating weapon that was also very good for sniping with excellent accuracy upto 500yds (my longest in-game kill using this rifle with a scope currently stands at 296 metres!).

I now start working the field boundaries walking steadily or crouching depending on whether I think there is a hunting opportunity. This field is a good one most evenings… 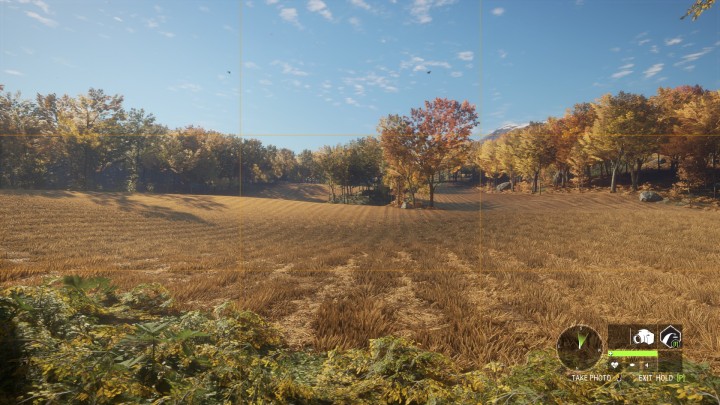 …when Fallow herds can often be found grazing at the far end. At this time of day I might have found a Roe deer but not on this occasion. Foxes also patrol these fields but I’d need to get very close to take one down with the bow – and foxes are usually too alert and cunning for that to happen unless I’m in a hide of some sort. 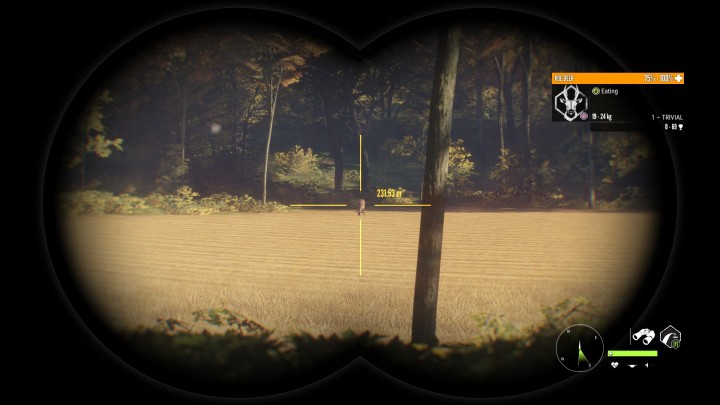 …but at 231m that’s a very long shot without a scope. I decide to make my way along the field boundary and then to work down the side of the field in the hope of getting close enough to get a better shot but before I get more than a short distance along the way, I check and she’s gone. I don’t think I scared her – she was probably full-up and off to chew the cud somewhere. I used my Roe Lure again in the hope of enticing her back as I made slow progress along the side of the field. Then I heard a responding call but from a different direction – another Roe was out looking for a mate. I made my way to the field where the call seems to have come from… 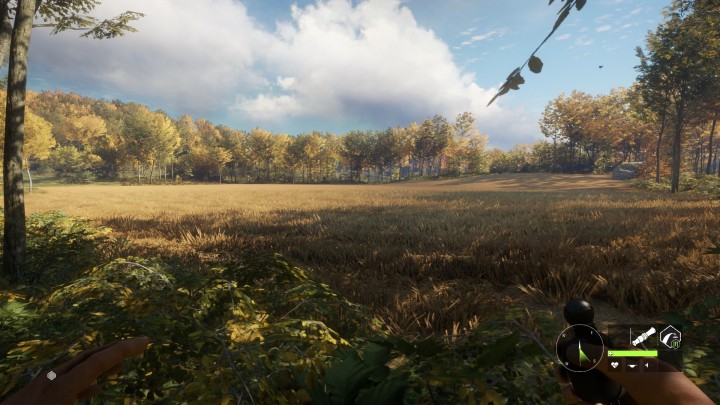 …but there’s no deer there. Then I hear another call and I realise my new Roe has crossed the boundary and is in the adjacent field. I quietly moved across, keeping low in the undergrowth and there he was walking towards me… 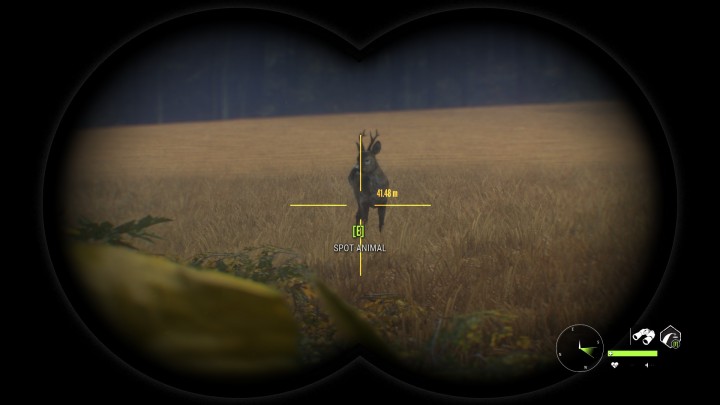 …I chamber the round and take aim… 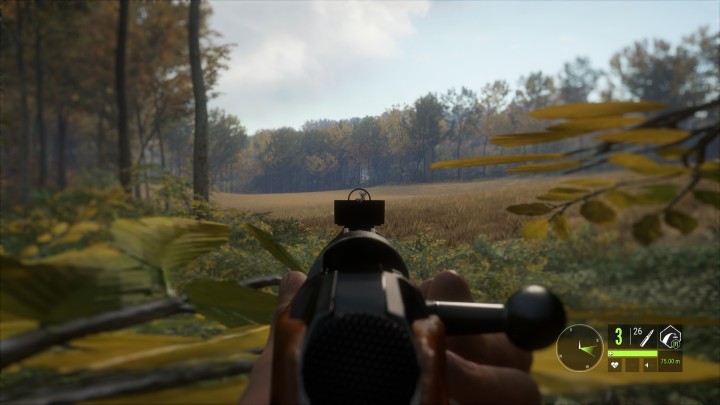 …A gentle squeeze of the trigger and a loud bang… 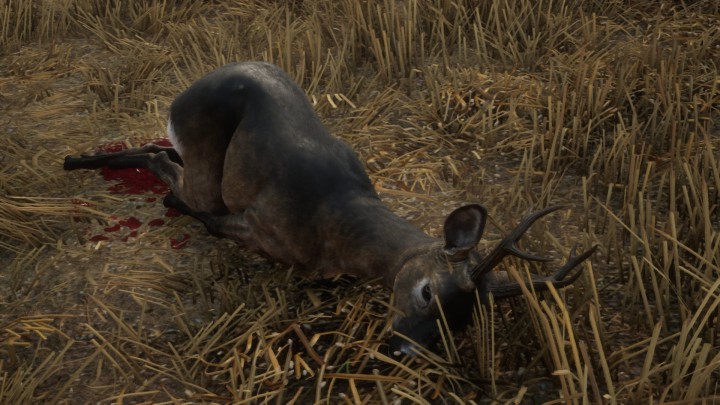 …and that’s a very nice example of a male Roe Deer. I clearly adjusted my aim after taking the ‘looking down the sights’ screenshot above because the in-game results screen shows the shot hitting him in heart and lung… 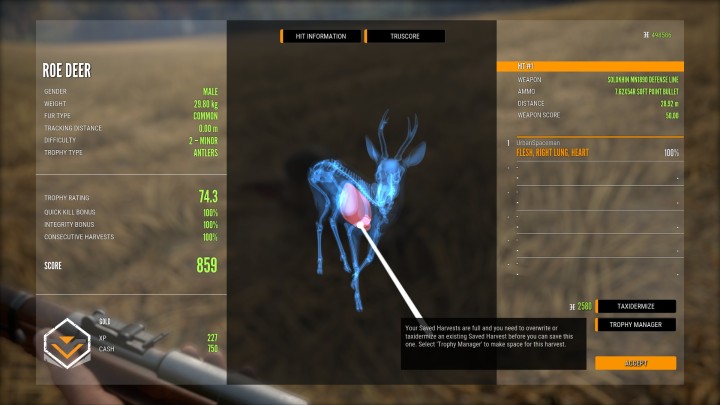 …which is why he went down instantly.

I continued my hunting by circling round the rest of the Schonfeldt straw fields. This field sometimes has Fallow and Roe Deer, and sometimes Wild Boar – though that’s usually in the evening… 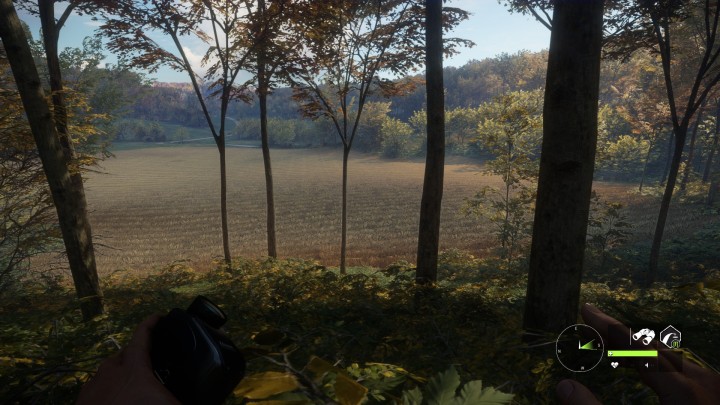 … I did see a small herd of female Fallow’s but they were close to 1km away and making their way along the edge of some wooded high ground. And I did find the tracks of some others in a wooded field boundary… 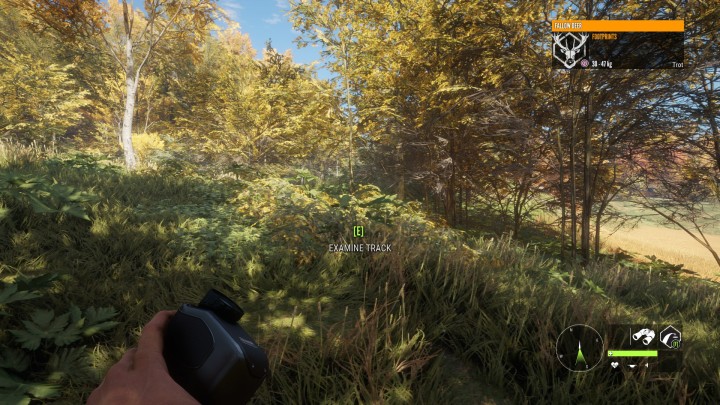 …Female Fallow Deer usually travel in a group while the males are often solitary. Roe deer are solitary, having their own territories and the female usually lures a male back to her abode for mating – at least that’s my understanding of how the love life of deer species works 😉 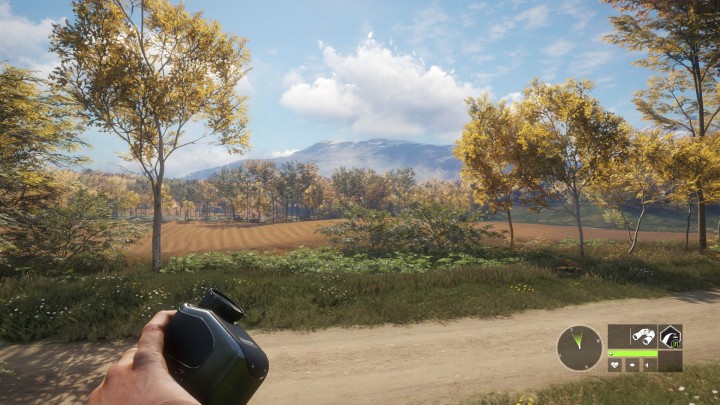 …a sure sign that rain is coming in. And here it is… 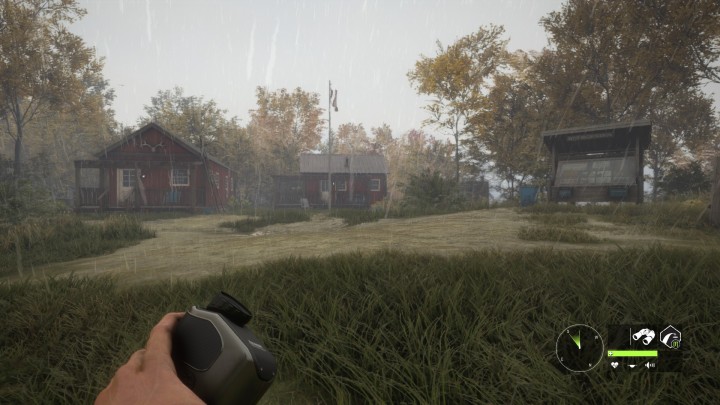 …Time to put the guns away and settle down to tell our hunting tales around the fire. ‘Did I tell you about the one that got away?’ 🙂

It was quiet out there today – on another day we might have downed half-a-dozen animals on a morning’s hunt. I hope you enjoyed the hunt and that being walked around with me was preferable to just seeing shots of deceased animals with no understanding of how they got to be downed in the first place. This game is in many ways like going birding for me and a great way to spend some time when the weather or having an attack of Man-Flu precludes actively going out to watch the wildlife.