Here we go with a quick look at a game that I’ve recently started playing – Farming Simulator 19. There is a bit of previous with this title. 3 years back I bought the 2017 version of the game. I did a few hours in it but in many ways it just couldn’t hold my attention. Looking back, I think this was because of the starting set-up which in normal difficulty mode gave you a farm with much of its infrastructure and machinery in place. The idea was to farm your 3 fields and do work for other farmers in the area so that you could ultimately expand your farm by gradually taking over the other fields on the map. But you were stuck with machinery that was already a maintenance costs liability and you might not have really wanted to do the type of farming dictated by the machinery anyway!

FS19 changes all that. The normal difficulty mode has changed name to Farm Manager – but that’s not telling the story at all. Now you start with nothing but €1250000. It’s up to you to choose what land you buy and what equipment you buy. And that means you can choose from the start what type of farmer you want to be. The game starts by placing you in the bottom rh corner of the map. There is a nice set of 3 fields there which the dev’s seem to be offering as a good place to build your farm. But, like in most games, it’s best to look at the other options before making your land purchases. One issue with the fields in that ‘suggested’ area is that they already have crops – two of those crops require more specialised equipment so you’d be spending a lot of money on diverse equipment right at the start if you want to make the money from those crops. I chose 2 medium sized fields elsewhere that also had crops but Barley and Wheat are common crops and you only need one type of Harvester to benefit from these.

And that’s how I started the game. After buying the land, you build a farmhoue assuming you want one, and probably a shed for your machines to live in – it’s up to you how you spend that starting money! And that flexibility is why I’m enjoying this most recent version of the game. Here’s some shots of life on my farm… 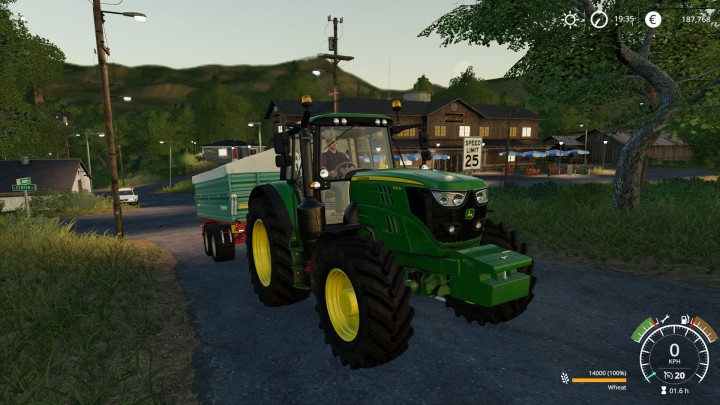 Crops harvested – it’s time to decide what the next crop should be and whether to get into livestock of some sort. I think this game may need its own posts like Trucking Digest and Birdshot – now I need to think up a title 🙂