Playing The Hunter COTW as well as American Truck Simulator gives rise to terminological confusion. I mean – This is a Bear right?… 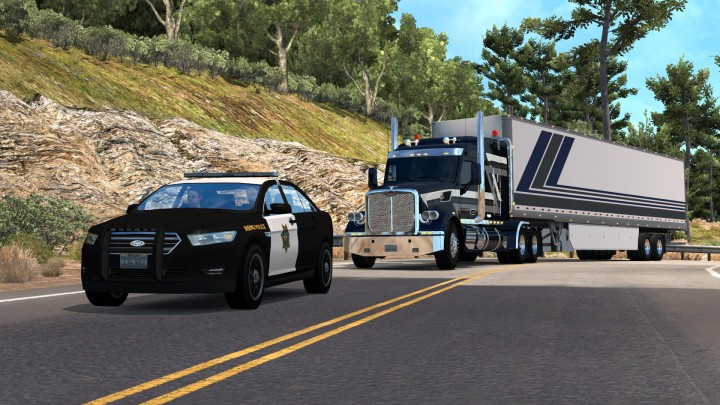 … and if I say I’m loaded for Bear, I assume that means I’ve fitted a bull-bar to my truck? Ok – I’m a confused bunny 😉

Actually, at present I’m only meeting bears in Layton Lakes which means I’m meeting Black Bears and they usually run away from you rather than attacking. They are relatively easy targets for the 7mm rifle and my more recently acquired Eckers 30-06. In fact, they can be taken down by the .270 rifle, so even in the most early stages of the game, the player can get the rewarding glow of having taken down a bear! I have yet to start visiting the Russian Medved Tiaga reserve where I will meet Brown Bears and in future I hope to add Yukon Valley to my reserves where we will meet the mighty Grizzly which I doubt will be anywhere near as cuddly as Boog from Open Season!

Having been victim of an unprovoked attack by one particularly Monday Morning-mooded Wild Boar in Hirschfelden I have declared war on piggies – another cultural terminological clash with trucking when thinking about the Police – so I’d better clarify that I mean the ones that run around on trotters. The Boar in Hirschfelden are actually ok if kept at a reasonable distance and I was probably unlucky to get injured by one – I’ve made a point of keeping them at long range since except for the battle of Petershain Cornfields that I mantioned in a previous post. However, I am now making some progress in the African reserve of Vurhonga Savanna. Here we find Warthogs – very nasty belligerent beasties! Having had a battle with them I’ve concluded that the .45 Pistol isn’t going to be much use in personal defense – they have very thick skins and heavier skulls than their European counterparts. So I’ve added a new rifle to my collection – the Coachmate 45-70. This is an old-school lever-action repeater rifle very much like the Winchester of old but with a hollow-tipped slug heavy enough to take out a Boar at close range. I’ve been testing it on the Euro-Boar and it’s very effective up to 100m without a telescopic sight. For longer ranges I’d still use the Solokhin MN1890.

So what of Africa? The Vurhonga Savanna Reserve puts you in the position of a new Warden coming home to your family lands and has a set of missions that draw on local beliefs and culture. You will learn about Nyaminyami – the Zambesi river god – quite early on as well as the need to appease the ancestors in order to maintain the goodwill of the spirits. This is a part of my actual life as a result of my marriage to Epi, so it’s good to see that the game designers have tried to bring some of culture of the region into the game. I promise I’ll bring some shots of this very different environment in the next Birdshot – the early morning skies can be spectacular when there are storms about!

Finally, I had a couple of tips I wanted to add to those I gave in the last Birdshot. Roads… This is more applicable to Hirschfelden than to Layton lakes although it does apply to the tracks there to a lesser extent. Roads are a route for humans to use. But the animals will use them too – it’s easier than walking through dense brush. They also have to cross them to get to places where they drink, eat or rest. So, walking along roads whilst making you easier to spot, often gives you a clear idea of what animals are travelling in the area you are hunting in. Here’s a morning road walk I did a couple of weeks back…

…Walking the same road the next day at the same time produced only a Fox and a Roe Deer – it’s good to remember how hunting pressure works but also how the animals cycle of movement varies over time. The game developers have put a lot of effort into replicating animal behaviour so that the animals behave realistically. I may know that a certain field is a preferred evening feeding location for Fallow Deer but there is no guarantee that they will actually be there on any given night – a bit like the visits of the Long-tailed Tits to my garden. The on-line gaming magazine Rock, Paper, Shotgun did an excellent article of an interview with the dev’s about this realism which I feel is worth a read🙂

Boar and Deer are more active at night – so you have to hunt at night? No – Deer and Boar do mostly rest during the day but they still move around. The reason they do this is to prevent themselves from being easily found by predators while resting. The fact that the predators in Europe have largely been wiped out has not altered that behaviour so you will find groups of Deer and Boar moving from one resting place to another in daylight. As for Foxes – they are a predator and spend much of their 24hrs hunting for the next meal or a mate. In the US and African Reserves the same largely applies although Lions tend to spend the day lazing in the sun – I shot one poor male who was hiding behind a bush with the .338 – it’s not the ideal choice of gun but it was a good shot and he didn’t suffer too much beyond the initial surprise. When I can afford one I’ll get the .470 for Lions and Grizzlies 😉

Hunt Club Challenges… These are currently a Beta addition to the game. They’re worth doing because they boost your cash earnings. They will also give an additional short-term focus to your hunting activity for those times when you may not yet have the equipment or experience to handle one of the in-game missions. Most of them are easy but others can be a real challenge. This is also the area where community challenges sometimes appear. 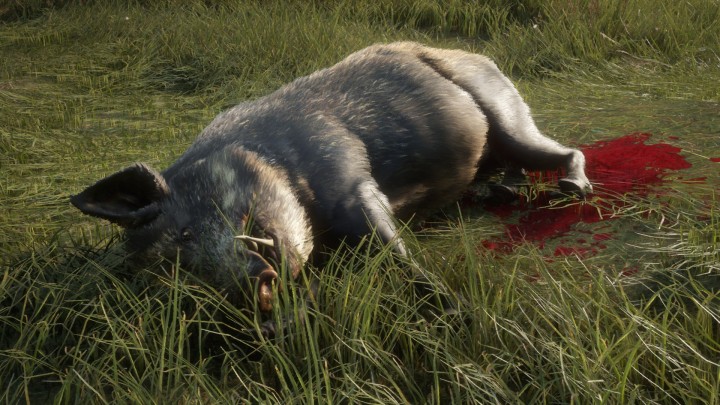 …was walking on the heath – when suddenly he became the first victim of my 45-70. The Blood tells you it was an instant kill. Very pleased with that as a first shot at nearly 100m range 🙂 Always remembering – this is only a game – my best wishes to you all!