Today was a fairly normal day on the road for me. I’d delivered a load of drinks to Santa Fe the previous evening before driving down to the truck stop outside Albuquerque to rest up. Thought it’d be busier really but it was only half full. So, this morning I took the chance of a quick wash and brush up before breakfast in the grill. Then it was time to check in with Jed, my dispatcher. I brought Jed on board not long after I got my first rig, the Peterbilt 579. Back when I was a hire-rat it didn’t matter if the office was a mess but once I became an owner driver I quickly realised that some organisation was needed at home base. Jed’s an ex-driver – gave it up because he wanted to spend more time with his family – so he jumped at the chance to get back into the business without having to spend long nights away from home. Together, we’ve started to build the business.

I remember the look of surprise on his face when I came back to the depot in a Freightliner FLB a few months back. I saw her at a Kenworth dealership in Los Angeles and fell in love – old school cabovers have a certain appeal and she was in beautiful condition. I reasoned back then that the time was right to expand the business. We advertised for a driver the next day and spent quite a while looking over the applicants – Jed said we should go with a young lady name of Mille. I wasn’t sure but she had the best credentials of the applicants so I agreed. It was a good decision and Mille has quickly become one of the Republik family!

I rang base – “What’ya got for me today Jed?” It seems the weather in Bakersfield is bright and sunny – funny how a question about consignments and manifests starts off with a weather report – but that’s Jed all over! “Yeah – it’s a sunny morning over here too! – now quit stalling.” It turns out that jed has sourced a load of white goods – Toasters, Kettles and Microwaves – going south to an outlet in Las Cruces. “You’ve remembered I’m in Albuquerque, right?” “Yeah – collection is just across the interstate from where your at. They’re open and ready for you, said you can come ahead!” So that’s my first job of the day. “And…” Jed continues “I think the receiving company will have a follow-up consignment – I’m just negotiating that at the moment.” Now that’s good news – nothing costs a company more than dead time.

I haven’t told you but I’m out in a new truck – well I’ve had her about a week. We were ready to expand again so I popped into the local Pete dealer thinking about a second 579. I’ve been really pleased with the first one – reliable and economical. Mille certainly seems to be getting the best out of it. I told the dealer my thoughts – I like the 579 but I’d like something a little a little more traditional. He suggested the 567 – it’s a 579 but with a heritage twist. In fact they even do a Heritage model! I liked the idea and decided to get a special paint job – whilst Jed didn’t agree with spending the extra money I’m sure he’ll like her when he sees her first hand. You see, the Bakersfield dealer couldn’t source the special so he put me in touch with his fellow dealer in Flagstaff who was happy to help out. He even took a photo of her as I drove her around the block for the first time… 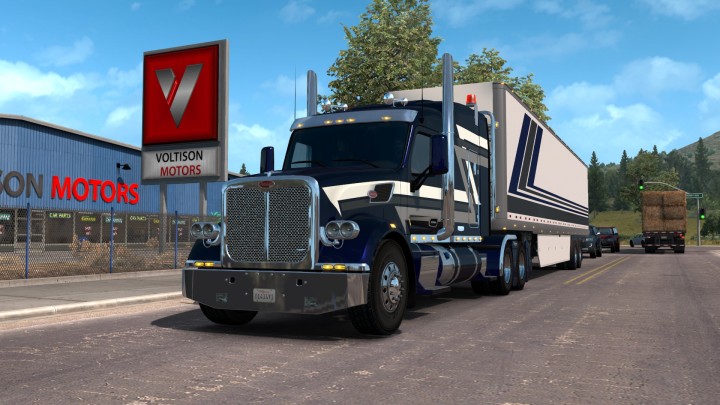 So back to now – I picked up the load for Las Cruces and set off down I-25. Traffic was light until I reached Socorro. It was like night of the living dead driving through there and we came to a stand on a couple of occasions for no good reason other than people not knowing what lane they needed to be in. Losing momentum is frustrating for truckers and it gave me an excuse to test the air-horns – Yepp, they work! I was just crawling into Las Cruces when Jed called back – “That follow-up is confirmed – You got used packaging to take over to Roswell – I’ll fill you in while they unload you.” When I arrived at the delivery point it seemed like the only guy around was security…

Jed came back with details of the used packaging consignment – it’s destination was unknown until just before he called me because the consigner was looking for the best price for handling the stuff. Now Roswell was confirmed. Used Packaging doesn’t pay very well but as a load to fill in the rest of the driver’s hours it’s a good option. My concern was whether I’d make Roswell inside my remaining hours. Jed said “You’ll be fine.” – and promptly hung up! With the cargo unloaded I had to shuffle to a different bay for the old boxes to be put on board. It always amazes me how empty boxes weigh more than full ones – close on 39000lbs to drag east.

…skirting Alamogordo and up to Carrizozo before turning east once more. It’s quiet on the road late evening and you get to thinking. Names of places en-route remind me of the Westerns I saw when I was a kid – the Rio Grande that we crossed near Las Cruces. There’s the Pecos River over at Roswell – There’s no law west of Dodge and no God west of the Pecos. And we’re riding the Billy the Kid Trail – now hows that for a liturgy of westerns?

By the time I reached the outskirts of Roswell I was starting to feel tired. It’s funny how the signals seem to stay red for longer when you’re reaching the end of your drive and looking for a nice warm bed! I made it to the delivery just within my hours and the handlers unloaded the trailer pretty quickly. Then it was time to head for a motel – I needed a proper night’s sleep!.. 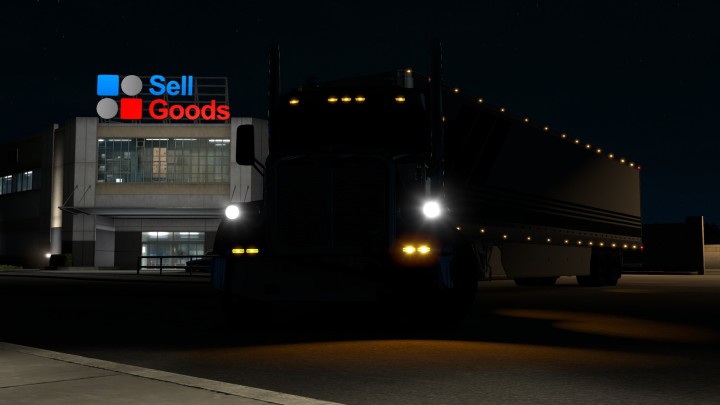