This is a bit of a departure from my normal games.. sort of. The game I am trying out is The Hunter: Call of the Wild. As it says on the label, this is a hunting game – You are expected to go and kill animals. Let me clarify my position on real-world hunting in this first paragraph. I would never go out there with a gun to kill a living creature. I think trophy hunting is wrong, especially when it entails endangered species. In fact I can’t understand why those people that choose to hunt trophies don’t try it with a camera – you have to get a lot closer with a camera to get a good picture than you need to get with a high velocity rifle to get a kill, so where is the true skill and the true challenge? Equally, I recognise that hunting is often an essential part of land management for the rural community in order to control pest species. And culls can be an essential part of managing the eco-balance on nature reserves too. Whatever our personal sensibilities on the subject of hunting, this is a computer game and the only animal likely to be hurt is the player!

I started by saying this is a departure from the norm but that isn’t entirely true. I have reported on Fishing Planet in the past – a game that I still play. This game shares some wonderful scenery with Fishing Planet…

And Fishing Planet is a hunting game too – it’s just that we’re perhaps not so sensitive to the practise of catching fish given that normally in coarse angling, the fish are released after the fight is over. Shooting in computer games doesn’t bother me – You’ve seen a recent review of Warframe but I’ve also shot human beings in Call of Duty including in the controversial ‘No Russian’ scenario (If you don’t know what I’m talking about, look it up!) So pointing a gun and shooting a living thing is a requirement of some other games I’ve played and there’s two examples of games where there is a similarity to this one. Of course, the only similarity to Truck Sim’s is the rest stops – Outposts in the Hunter. Actually, Truck Sim’s scenery is pretty awsome too!

I’ve actually made a case for why this game isn’t a departure from my normal games – but it is. Fishing planet may be a ‘hunting game’ but once you’ve learned a few basic skills and got access to a good range of baits you will be reeling fish in (because of the time scaling) every couple of minutes. It’s the way that game maintains your interest. Warframe and Call of Duty thrust you into ‘target-rich’ environments for much the same reason – you don’t get to experience the boredom of the time between battles. Of course with Truck Sim, you’re in the driving seat all the time so there’s no chance to get bored, although you may experience real world tiredness at the end of a 1500km drive!

You start this game with your first victim – a Roe Deer – set up for an easy shot. It won’t move while you take aim… It won’t bother if your scent is filling its nostrils… It won’t call to warn its fellows… Make the most of it – that’s your one set up kill. You will need to work for the others unless the game has a glitch – which I have experienced occasionally. Much of your time will be spent on futile tracking of footprints and pooh. The animals do seem to scent you very accurately and make themselves scarce as in the real world. Moving makes noise – another way the animals detect your presence. But… If you can sneak in close enough, get a clear shot, then you should get a kill for your trophy cabinet. If your shot is poorly placed then you will have to follow the dying animal until it keels over – not a nice experience 😦

The game gives you a good basic rifle and sights to start with and you can buy upgrades as they become available. You get a mix of animal lures to help as well though I’m not sure they are very effective. You also get a map of the reserve and some guidance from the reserve warden who is also there to give you some objectives. Very early on you start to learn that you will be doing a lot of walking without much happening. It’s very important to find the outposts because these will give you your base station for each day’s hunting, so in the early stages exploring should be probably be a higher priority than hunting. Doing the challenges from the Warden will build your base too so it’s well worth the effort to persevere with those.

I mentioned in my first paragraphs about my views of taking photos rather than killing animals. To its credit, one of the first challenges in this game requires you to get photos of Fallow Deer – and you do get paid quite well for getting them… 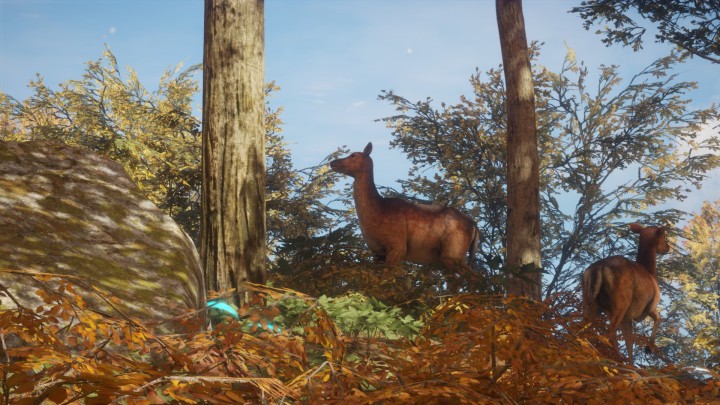 …But, what a shame they didn’t offer the option to do the game as purely a natural history photographer? I wonder if there is a market for a game where you go to see and record wildlife as a photographer and wildlife observer? This must be something for those involved in Nature Conservancy like the RSPB to look at as a way to involve and educate children about wildlife? I’m enjoying the game but I do wonder if I’d enjoy it more if I wasn’t so conflicted by the need to kill when other options could have been available.

ps: In case you think the guy with the rifle always wins… The thing that piqued my interest in this game was a clip on Twitter where a guy shot a Bison in the bum and it came running round and gored him 🙂 I saw a video where the player reported that he was atttacked by a herd of deer. Now that was very interesting – I have never heard of anything like that. I’ve now experienced it in game! It’s not about being attacked – you’re just in the wrong place as the bovines run and you get trampled. I’ve also experienced the Roe Deer that just jumps up as you pass because it hasn’t scented you and you get injured as it runs past. In the real world I can remember having to find some space to melt into on a footpath near Oxford as a cow decided to charge down the footpath – a very frightening moment from 30 years ago!

If you can put aside any views you may have about real world hunting, I think this game will be a worthwhile change from the action shooters and sits well alongside other hunting / fishing simulators 🙂