Last time we went to a sci-fi future in Warframe – a free to play third-person shooter with the emphasis on earning rewards to collect new items.  This time we’re staying in the world we know and we’re going to the workshop.  Let’s talk about Car Mechanic Simulator 18.

This is a simulator more in name than reality. You start in a basic garage with a limited toolset. The idea is to accrue points by fixing faulty cars as requested by customers. Each part you remove or fit will get you one point. The idea is to gradually improve your toolset and expand your garage by completing jobs. You will spend a lot of time undoing bolts and screws and doing them up again! And that’s the mainstay of the game. Boring, you may be thinking. On a basic level yes it would be but, as you moved beyond the initial simple jobs, a degree of investigation and intuition becomes a necessary part of each repair. The cause of a ticking noise from the engine bay can be elusive even when you have every testing tool at your disposal. Combine the therapeutic nature of repeated actions with the mental challenge of tracking down a tricky fault and you have the basis of a very pleasant game.

Initially the jobs come with a list of parts you need to change – brake pads and disc’s for example. You will still need to identify which specific ones are needing changing – it’s not good business to change everything for the sake of it! At the start you will confirm the correct parts by visual inspection. You can take cars for a test drive too which is the only diagnostic tool you have to start with. Later you will gain a test path with your first garage expansion and be able to add several useful test tools like a compression tester and a multi-meter to your armoury.

The phone screen (accessed from the phone!) is where you take jobs. You’ll see that jobs have symbols indicating what areas of the vehicle are in need of repair. Running through the game are a series of story jobs where the customer explains how their car came to require the repairs you are undertaking – most of which have a degree of humour. Here’s an example of the jobs screen with one of those story jobs highlighted…

Some of the car names will be familiar, others won’t. It’s the old ‘licensing’ issue that I’ve mentioned before when writing about the Truck Simulator games. That’s the first area where the simulation is compromised. Some licensed products are now making their way into this game in the form of paid DLC’s along with user created content. Other areas are the reality of the installation within the vehicles – things like fuel and brake lines are not represented. The range of parts is also limited (though growing with each new update and DLC) which means that on some vehicles the fit of the parts is not perfect, especially on user created mods. However, the vehicles themselves look the part.

I mentioned the progression by earning points to expand your business and enhance your toolset. Here is the screen where you spend the points accrued…

You can see along the top row options to improve your parts repair skills – useful for reducing costs though you shouldn’t start trying to repair items too early. Further down in the centre of the screen you can see a variety of test tools represented. The large vertical bars represent upgrades to your garage – the first of which on the left gives you the very helpful test path.

Once you have built up your repair expertise you can start rebuilding vehicles that you have purchased second hand from a barn. This is another aspect of the game where you can become a dealer and sell on vehicles that you have rebuilt. This can be very profitable especially once you have worked out how to judge the potential value of a vehicle before paying the asking price for it. Here’s a sequence of shots of the rebuild of a straight six engine… 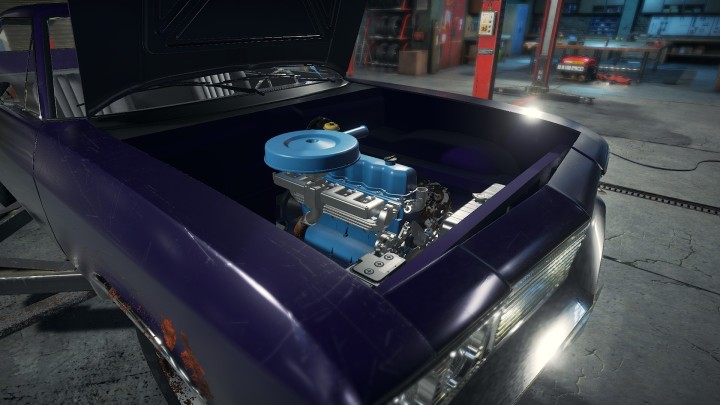 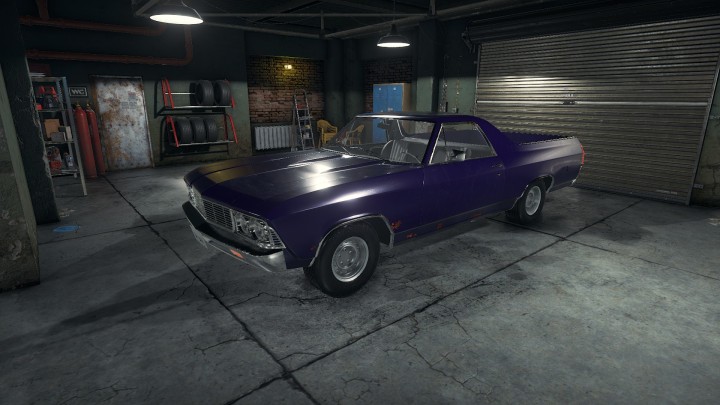 …Some of you may recognise the vehicle as a mid-60’s Chevrolet El Camino. I sold it for a healthy profit despite the minor bodywork issues. The ability to repair bodywork comes later in the game along with access to a paint shop and tuning facility.

So that’s a brief run through of Car Mechanic Simulator 2018. When you need a break from looter-shooters and just want to relax – this is a very good option 🙂