Ordis has been thinking… Who’s Ordis you ask? – Someone you may get to meet in a future post but just like Ordis I too have been thinking. The thinking has been about where this year is going and about what I will be posting on my blog. And, while I’ve been thinking, not a lot has been done. Now it’s time to get back on track. Firstly, Trucking Digest will continue but some weeks it will be replaced by a different post about other games or simulations that I spend my time playing. This was something I was contemplating 12 months ago that never happened. I hope to get back into my transport outings more too – something that has been on hold during the latter half of January due to a swollen joint in my foot 😦 And I also hope to continue my participation in the photography challenges from Cee and Nancy. So that’s the road forward after a period of rag-chewing with myself in the truckstop.

So – Trucking… I think this first serious post of the year should be about what’s coming to Euro Truck Simulator 2 and American Truck Simulator. SCS Software have been much better over recent months at feeding the community with information about their intentions. There are regular streamed interviews with the developers and the boss in which we are told of their ambitions. Even so, there’s always a bit of reading between the lines to predict some things and they also like to surprise us sometimes!

Definitely coming is release 1.34 – not that there is much info about what will be in that release. I think I can reliably predict that in ATS it will include changes to the roads in northern Oregon in preparation for the release of Washington – already notified by SCS as the next state to be added to the game and probably arriving sooner rather than later. In Euro Truck I guess that we might get another section of Germany updated to the latest mapping standard. In both ATS and ETS2 I also think the range of ownable trailers will increase. Both games desperately need Low-Loader trailers for us to own – My European heavy-haul division Scania R580 is currently employed helping out with normal deliveries until we can get these dedicated trailers…

…Rather a waste of her horses!

In the longer term I suspect that we will see a European map expansion into northern Spain and Portugal. I’d be surprised if the whole of the Iberian Peninsula were to be released in one go. But, the Baltic states were a huge area so who knows! That is one of the things hinted at by Pavel during a streamed interview though he didn’t specifically mention those nations. Other things floated in the breeze – I sometimes wonder if SCS work on a “let’s run that up the flagpole and see what bites” philosophy – are seasons. You know; winter, spring and autumn – everything is in summer currently. Pedestrians and cyclists – again, this was not specifically stated but the hint was there. SCS recognise the need to bring more real world life to the game. Cyclists and pedestrians do exist, it’s just a case of getting them to interact with the road.

Now I’m going to add one that hasn’t been hinted at – Police stops for traffic violations, etc. Currently if you break the law on the road you get an immediate fine. In the real world the police would have to pull you over to administer the fine. With the introduction last year of escorting vehicles for special cargoes, police vehicles that interacted with you and your truck were introduced. I think that the code required to achieve that change provides the first step to full interactive policing though I suspect it will be a long job to achieve. Much of what has been said by Pavel on the streamed shows tells me that SCS are in it for the ‘long-haul’ and will continue to produce content and upgrades for the community. I think this officer is going to fall asleep at the wheel if I don’t wake him up with a blast of the air-horn… 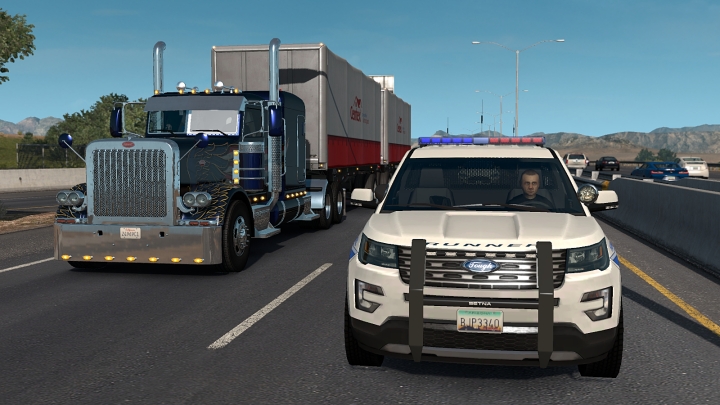 Finally, and hinted at by both SCS and MAN Trucks UK on Twitter, the license for the Euro6 version of the MAN TGX is likely to be agreed very soon. Like the Volvo VNL that appeared unannounced in ATS last November, the upgraded MAN TGX could appear in release 1.34 but more likely in 1.35 and it will be very welcome especially for us MAN fans 🙂 The next few months promise to bring lots of good things to both Truck Sim’s and I’ll keep you appraised of them in regular Trucking Digest posts. Keep the shiny side up and the greasy side down – Happy Trucking 🙂