When I set up a Trucking Company even though it’s not ‘real world’ I apply values to my company. In Europe, Martin Transport et Logistique have a smartly turned out corporate livery that I hope gives our computer generated customers confidence in our ability to deliver. I had a humorous bit of banter from one of my football colleagues on Twitter. He hoped that we ‘deliver more accurately than TeeJay delivers a free kick’ – a reference to one poorly placed delivery into the area from a free kick in a recent game 😉 I can truthfully report that Martin Transport have not missed a delivery time despite undertaking important and urgent deliveries for our customers and we take great pride in that 🙂

In Euro Truck we’re doing Cargo Market jobs and we play those in game-time which gives me the opportunity to select contracts as appropriate for the time I have available between rest requirements. Selecting an Urgent delivery when you’re going to have to rest part way along the route would not be a good idea! So with careful selection we avoid late deliveries 🙂

In the US we’re in a different situation. Republik currently looks like a rag-tag operation – we have no corporate livery yet. We’re taking hauling jobs for other companies that need someone to haul their trailers. These are World of Trucks jobs and they work in real time. If Republik is going to do well then we have to convince our customers that we can deliver on time despite the old machinery we’re driving. Most of the WoT jobs give many real-hours to complete – you could park up on the way and have IRL dinner before continuing your journey on most of them 🙂 Yesterday was different!

I’m pushing on in ATS to get the money for that garage upgrade. I took a nice little job from Flagstaff to Show Low in the morning. When you drop off a load at a customer, since the latest game update, you can see if there are any jobs available from the same customer. So I took a look at what was on offer work wise from the Walmart where I’d delivered. I found a juicy job available among the normal dross. Show Low to Oxnard – that’s across the width of Arizona and California. The real world time to complete in? 1Hr 13 mins! My experience of ATS tells me that’s a really tight schedule. I’d expect this to take close on an hour in a modern 475HP-500HP truck hauling 25000lbs. This load was 39000lbs and we have 237HP – which carries the risk of stalling on a steep grade somewhere! Republik Trucking is always up for a challenge and will deliver (we hope!). Here we are ready for the off with one of the new trailers – it’s a big one!, well compared to Ol’ Dawg anyway 😉 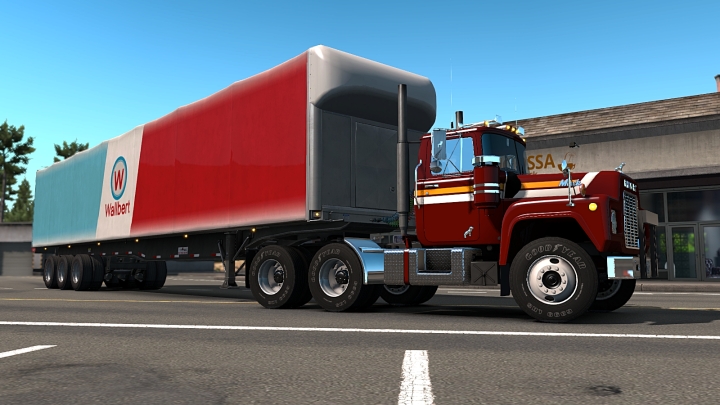 The route is already there for you when you couple up to the trailer. I took a look and immediately decided to change it. The shortest route from Show Low to Interstate 40 is on AZ route 77 down into Salt River Canyon and then back up to Phoenix. That’s a bad idea for a number of reasons – I don’t know how this new trailer type handles, the corners are sharp with low speed limits on a lot of that route and the climb out of the canyon is brutal. I reprogrammed the GPS – we’d route round via Flagstaff and Camp Verde, picking up the original route at Phoenix. It’s longer but I believe it to be faster with a low powered truck.

Sometimes it seems that the game knows when you’re tight for time 😉 I hit 4 major disruptions as we made our way along the route. The first on the I17 could have killed the job in its infancy – a police incident on a steep upgrade just south of Camp Verde requiring a change of lanes that fortunately saw a gap in traffic. If I’d have had to stop I probably wouldn’t have been able to get going again without a tow truck! Picking up the I10 from Phoenix I twice met roadworks requiring a change of lanes and adjustment of speed to filter in with other traffic with each event burning off valuable momentum and costing time. Then, just after Quartzsite there was a car on fire closing the right lane and once again we had to swap to the fast lane. This time a van in front decided to slow down to rubberneck which meant some serious braking for me and dropping down to 20mph. From there it’s a very long drag up the climb to Chiriaco with a heavy load trying to get back up to speed and losing valuable minutes all the time – I hate VW Transporter drivers!! That delay put me dangerously close to being late but we pushed on. The GPS wanted to route us through Barranca Street but we stayed on the I10 to connect directly with the I5. Then we picked up route 118 to take us into the north side of Oxnard and to the Fed Ex depot to deliver our consignment with 4 minutes to spare 🙂 Republik Delivers – Anytime, Anywhere but Always On Time! 🙂 And all done without exceeding the speed limit, so no Bear Bites either 😉

Footnote – if some of the map references in our run don’t seem right remember that this is SCS’s 1:20 scale map which sometimes distorts the real world to achieve a good driving experience for the players