This week I’ve been pushing on in American Truck looking to build my kilometres travelled towards that ‘The Longest Journey’ total of One Million. On Tuesday this week I cleared the 900000km mark on a day when I drove over 2,500 miles in ATS – 5 hours of time behind the wheel. This was all driven in the Mack R600 – what a fun truck to drive! You may wonder what makes a fun truck and I’d be hard put to explain. One reason I love this Mack is because it lacks power – only 237HP compared with today’s 450HP norm. And the 10 speed gearbox tells a tale of needing to really drive the truck over places like Donner pass…

…The sound of the engine on tick-over reminds me of the AEC buses of my youth. What’s not to love! It’s a piece of history and very well implemented in the game.

This week also finds me at a crossroads in my truck sim driving. I wrote about the proposed introduction of trailer ownership to both versions of truck simulator. That was just two weeks ago – now the changes are in open beta testing! SCS always appear to be doing nothing and then we get an explosion of activity 😉 So I have a dilemma. That ‘Longest Journey’ achievement is in touching distance. But the new 1.3.2 update for Euro Truck and for American Truck will give new trailer ownership options that can only be used with standard game jobs. The Longest Journey achievement can only be completed doing the online World of Trucks jobs. That’s a bit of a shame. I’m sure there are other virtual truckers finding themselves in the situation of having to choose between World of Trucks jobs or owning their own trailers. My solution is a division of labour. Euro Truck will be my test ground for this change and ATS will be my grinding ground for racking up the kilometres towards that WoT goal.

I took the step of downloading the Beta test version of Euro Truck Simulator yesterday and it looks good though I see the ‘bloom’ issue is ongoing! I deleted my profile so that I could test from the very beginning and so far it looks a very clean game change. I did discover one change very early on that is, in reality, a fix. I rolled a truck while going around a bend on an autoroute. Fortunately it was only a DAF so who cares 😉 Now that’s something I haven’t done in a very long time because 1, I drive safely and 2, the trailer stability settings were broken. But trailer stability now works and I’m going to have to find a setting for it that is realistic.

Just found this posted yesterday on the forum by an SCS Developer…”just note that with 1.32 (current open beta) the interpretation has changed. first, range of the value has been fixed so it gives cog offset in meters directly now. for similar effect as before use like half of your previous favorite value. second, effect of cargo on cog is more visible (see trailer def data), so heavier cargo will have bit bigger effect than before (thus i wrote “like half” instead of “exactly half”). third, default cog of empty trailer is bit higher now (by cca 5cm). and last, the slider was changed from range 0 to 1 to range -0.5 to 0.5. default value is still 0.5 as before so most people should have similar behaviour as before (bit more real). the “correct” value of slider is close to center. but as the feeling is very subjective you can tweak it in both ways …”. Written like a true coder – without capital letters 😉 Guess where I decided the slider should be after the joy of wrecking a DAF? – In the middle!

North-western Germany has been upgraded to a better standard of mapping and I’ve deliberately taken jobs to that area so I can take a look at the changes. We now have variable speed limits on the Autobahn near Hamburg… 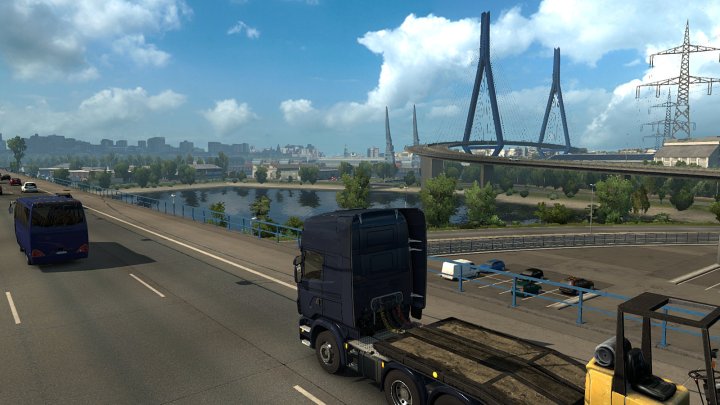 …That’s definitely an improvement. The junctions are more realistic, the curves on the roads have been eased and the road signs are more authentic. Can’t wait for the rest of Germany to be brought up to that standard along with the other older sections of the map 🙂

So, lots of fun going on in Euro Truck for me currently. Still got to continue racking up the miles in ATS. Harven, maker of the R600 truck mod, has warned that updating the trucks to work in the new version of ATS when it releases may take some time as the modding tool itself needs to be updated before the trucks can be brought into line with the 1.3.2 changes. So I’m going to head back towards Bakersfield where I can park up the R600 and take out an official SCS truck to avoid any conflict issues when the new 1.3.2 patch drops. I’ve got a nice new Peterbilt 389 sitting there waiting – she’s named Night Train after the Oscar Petersen Trio album 🙂