Euro Truck Simulator has been around for a very long time in computer game terms – very few games are still played by thousands of players every day after 5 years and ETS has been around for 10! Upgraded to version 2 in 2012, Euro truck was joined by American Truck Simulator in 2016. Last year’s Christmas event saw over 300000 players participate. Where most games would be in maintenance only mode or out of support ETS2 and ATS are very much in full development. I doubt that SCS Software ever anticipated such a situation when the game first launched! What do they have in the pipeline now?

I don’t need a crystal ball for the already announced planned releases. In Europe the next map DLC will extend the game into the Baltic states of Latvia, Lithuania and Estonia, but also southern Finland and bits of Russia including Russia’s second largest city Saint Petersburg. There has been a lot of speculation about which state will be next for American Truck Sim. Already existing roads and some bold gamers that pushed on beyond the map boundaries suggested that Utah would be next after Arizona and that seemed to make sense as it would have squared up the map. But we got New Mexico instead making the map L-shaped. Again, Utah was suggested as next expansion but SCS had other ideas. We’re getting Oregon! Quite when these Map DLC’s will appear is currently uncertain but we’re being shown images of industries and other things from the work in progress – so probably in the autumn.

One of the most common issues expressed by forums is the original European map areas and the lack of realism of the roads in those areas compared with the more recent maps in France and Italy and the whole of American Truck’s maps. SCS have now a small team dedicated to upgrading the old sections starting with Germany. Currently the effort seems to centred around Hamburg – SCS Revisiting Germany post includes some videos of how the new maps will look from the cab. Clearly a major improvement. Quite when the changes will appear in game is uncertain but it looks like that northern section of Germany will be part of the next major release. I understand that SCS have estimated that the whole of Germany will take around a year to complete. Hopefully they’ll move on to the Netherlands, northern Belgium and the UK after that 🙂

Another gripe with users is the lack of in-game trucks available for ATS – currently 4 from 2 manufacturers. It’s a telling statistic that in my current profile I own 4 different vehicles which are all mod’s. In fairness one of those is the B variant of the in-game Kenworth W900 while the Peterbilt 389 is now available as an in-game truck which is why my mod-version is configured as a 379. SCS have dropped a hint in a tweet which showed one of their team outside Navistar HQ – I don’t think it was intended as a family holiday snap 😉 So it looks like license negotiations are under way for the current International Trucks range to be added to the game which would be a nice addition. Euro Truck is better served but there are some notable absences including the Renault Range-T – again, it’s down to getting license approval. In the meantime the dependable Renault Magnum soldiers on. 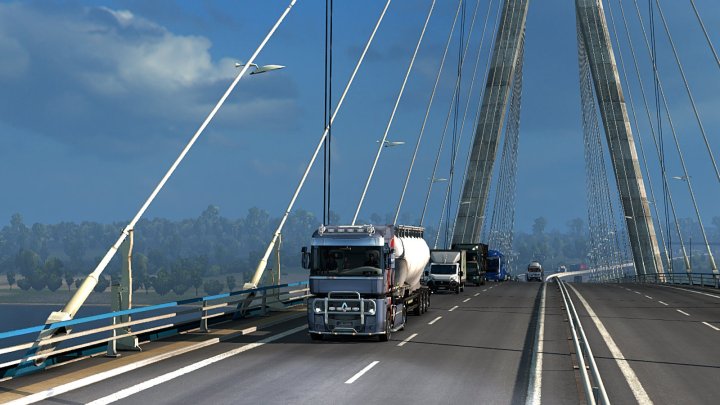 Other than the above changes to the game SCS have mooted a couple of exciting longer term changes. One of these is the possibility of players owning their own trailers. That would require massive alterations to the game’s economy and the way that cargoes are simulated so it’s not going to happen anytime soon. Another idea that has been run up the flagpole is the possibility of Virtual Trucking Companies within the World of Trucks framework. Presumably, that would need some form of in-house multiplayer version of the game to rival the current TruckersMP, but it might not as I guess that it could be a case of players jobs logged within WoT being allocated to a company that they choose to join in that community? It would allow players to operate with ‘realistic’ ai traffic rather than a world populated only by other players in their trucks. We’ll probably have a long wait to find out what that idea really means.

In the long term with such a loyal community, SCS have an issue caused by the onward march of technology. I understand that the game engine is built in DirectX 9. It will need to be dragged kicking and screaming into either the latest version of DirectX or possibly a different game engine could be brought in. I think SCS would prefer to keep it in-house to avoid being reliant upon an outside supplier. They have expanded their team a lot over the past year suggesting that they understand the scale of the task ahead. Meanwhile, the user has to be aware that it is only a matter of time before the older 32bit versions cease to work on the Windows OS.

That’s my ‘state of the nation’ view of where the Truck Sims from SCS are currently. For the moment the two games continue to provide a very pleasant diversion for thousands of gamers 🙂