I’ve often indicated that my favourite European trucks are the MAN range of tractor units. Other likes have been the Volvo’s and the Renault Magnum. Many of my fellow virtual truckers are fans of Scania trucks with the Streamline often being the absolute favourite. In the past I have tried out the Scania’s but, a bit like the Mercedes Benz, I was unable to like them very much. In fact the only Scania that has found a place in my personal fleet is the venerable 113.

Scania have created two new vehicles as the R and S series. Whilst retaining the traditional Scania styling, these trucks are completely new designs. Reviews tell how Scania have worked very hard to minimise drag by ensuring all gaps between panels are as small as possible. One reviewer noted that Scania have even put spot lights in the roof so that truckers won’t need to sacrifice the aerodynamic advantages by fitting their own – He added “Good luck with that Scania!”

Euro Truck Sim’s creators, SCS Software, were invited to the Scania plant once the vehicles were in production. They were given the opportunity to use the real vehicles to create accurate computer models and record the real sounds. The result is, SCS say, their most accurate truck to date. The new R and S series trucks were delivered into game as part of the 1.30 release and are available to purchase alongside the older P series variants.

I got the chance to try out the new Scania’s on driver for hire jobs and I was quite impressed. So when I decided to change over to a new vehicle and rest the faithful MAN TGA I opted for visiting the Scania dealer in Strasbourg to buy an S series and here she is…

I tried both the standard and exclusive dash set-ups. The instruments in the standard version didn’t look very good with the needles appearing to have aliasing issues on the computer – possibly my display. The standard dash doesn’t have a built in satnav either which means fitting one to the windscreen. I may have pennants and a no smoking sign but I value my windscreen space so I opted for the exclusive version which looks like this… 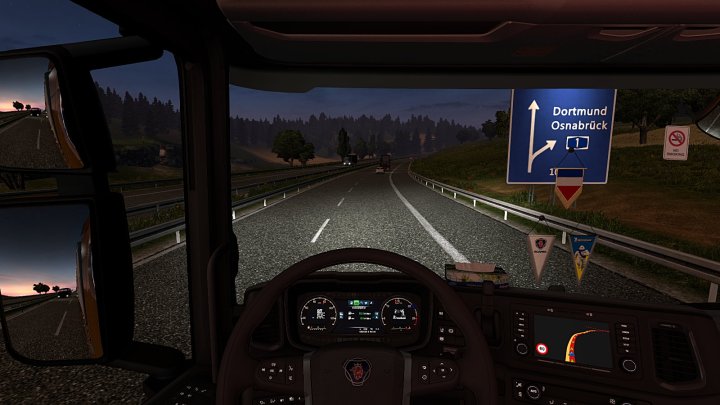 …The gauges are quite easy to read and the satnav is excellent. Forward visibility is pretty good too though I miss the huge picture window of the MAN trucks.

I went for the 450hp engine as I am intending to use the truck for normal cargoes. There are two different gear ratios available in game, one specialising for light loads and the other aimed at more general freight haulage. I found that the gears are set up in such a way that you normally cruise in 11th gear with 12th almost acting as an overdrive. I actually went and checked on the web and it seems that this is as designed. My first few runs were not as fuel efficient as they could have been because it took me a while to adjust to this idea!

I’ve completed 18 runs in this vehicle and I really like it. Much more refined than the Scania P series! So I’ve decided that she’s a keeper. I bought a new garage in Milano to expand my company into Italy and ordered two R series Scania’s for the new employees there. I parked her up there and treated myself to the Euro 6 version of the MAN TGX – which I will talk about in another post. Here’s a couple of shots of the S series on the road – taking Kerosene from Frankfurt to Ostrava… 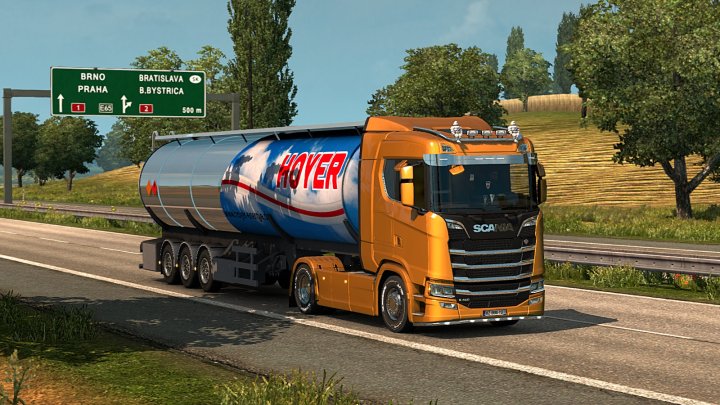 …and taking a load of cars from Bergen to Stavanger…