On Facebook I found myself nominated for a challenge. Normally I ignore challenges on Facebook. In fact I went absent from Facebook for several years because the number of ‘play my game’ requests was frankly annoying 😦 However, that problem seems to have become less prevalent. I decided to accept this challenge only because the nominator was my fellow Wingate & Finchley photographer David and I guess he has the right to stitch me up 😉 The challenge is as follows: –

Seven days, seven black and white photos of your life. No people. No explanation. Nominate someone every day.

I have declined to nominate anyone myself as David is nominating some of the people I might have considered and I don’t really want to inflict this on my other friends.

Ok explanation over – here’s the first shot for the challenge but as this is my blog, unlike the Facebook version, you will get some details of what’s going on… 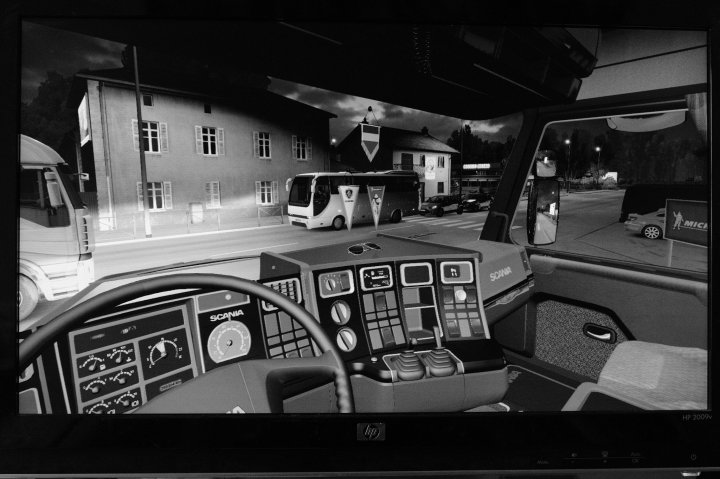 A shot of the screen rather than a screenshot 😉 I was waiting to turn left in Bourges and as I was stationary it seemed like a good time to use the camera. I am, of course, doing an early morning drive in Euro Truck Simulator 2. I’m in a Scania 113M and we’re taking a load of Aircraft Tyres from the Michelin factory to Nantes Atlantique Airport. Taken with the Fujifilm X-Pro2 using its internal ACROS Black and White setting. 1/70th at f5.6 iso6400.