…Oh Yes – planning on buying another garage in Montpellier. The best-laid schemes o’ mice an’ men
Gang aft agley. I had the money in the bank and was sitting in Bourges after a pleasant trip across country from Düsseldorf with a load of Beverages. Pleasant run it might have been but being mostly on back roads it was bad for the fuel economy as was the previous run with a load of Vodka. The company accountant will be spitting feathers 😉 So I’m looking to go and get that next garage before he notices and pretends that we can’t afford it! The trouble is that I can’t find a load from Bourges going to Montpellier nor are there any going to Marseilles or Toulouse.

What I can get is a load of boots going north to Paris. That’s Rubber Boots of the Michelin Tyre variety 🙂 OK – looks like we’re going to be buying our next garage in Paris. We set off from Bourges in the early morning light…

Now we need to put together the money for another truck and to hire a driver. I picked a job to deliver a Digger 1000 from Paris down to Limoges. It was all the way round on the other side of town so a long deadhead run to the job. Then down to Limoges where we delivered to Hellmann opposite the local Volvo dealer. I wrote about the way that some low-loaders cut the corner behind you previously and maybe this shot illustrates the point… 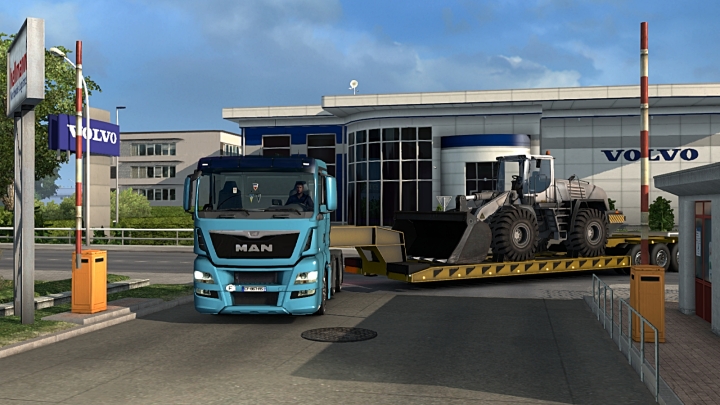 …That’s why trucks have to go onto the wrong side of the road to make a turn! Something us ordinary motorists / cyclists need to bear in mind.

I camped out in the Volvo Dealer – slightly cheeky as I was in the MAN but I am a customer so no complaints 😉 I still needed to get the money for a new truck for Paris so it was off to Le Havre the same evening with a load of transmissions. That was a long run and I probably should have taken a break part way but I decided to press on and get it done. As a result I picked up a couple of sleep avoidance fines. While I don’t view them as ‘driving errors’ in the same way as I would a collision or off-road excursion, I think I need to be a little harder on myself about these in future for the sake of realism.

…before heading back to Luxembourg with a Digger 500. With the help of Freja and Marcel’s work we had quickly amassed the necessary money to get the next Volvo for the fleet. Into the dealer at Luxembourg – Truck bought and delivered to Paris. I looked through the available drivers and a young lady called Marianne with an ADR qualification and distance skills caught my eye so I hired her.

Time to get back on the road and work towards that Montpellier garage. I’ll leave you with a shot of us running through the outskirts of Paris with our load of Michelin Tyres 🙂