As reported in my previous post, after the new 1.29 version of American Truck simulator dropped I did have some issues. Those are now largely resolved as I have identified the mods causing issues and either updated or removed them. Two trucks are still awaiting updates (Mack Ultraliner and Freightliner Cascadia) but others like the K100 and FLB are now fully functional which is great for the Lone Star Project as our existing K100 will drive ok and when I’m ready, a Freightliner FLB will once again grace the fleet 🙂 The only ongoing issue (until today) was the bloom on HDR settings. I turned off the HDR setting and after finding things were a little dark I decided to download Piva’s weather mod which I have used before in ATS to good effect.

I’ll digress at this point because internet security is an issue we should all be aware of and I want to give some basic advice. Many mods are too large for Steam’s Workshop. Also, some mod makers don’t like to entrust their stuff to Steam for whatever reason. So we sometimes have to go get those mods from one of a number of game specific mod sites. These use upload sites to store the files and those sites rely on advertising revenue to fund their existence. So each time you attempt a download a pop-up will open to one of the advert sites… Except it sometimes isn’t. It is very good practice to be conversant with how to deal with browser hacks – I had one of these when getting the download of Piva’s Weather mod. Not the fault of Piva but some blame should attach to the storage server owners who should really police their advertisers more carefully. But be aware that there are worse. While I was trying to get the latest version of the Kenworth K100 I found that on certain storage sites the file was not as expected. I ducked out before downloading. Key advice – Always confirm that the name of the file and its size are as expected before you download and check the file type! Be especially wary of .exe files because normally the files you are going to download shouldn’t be executables. And always install good Anti-Virus software on your PC!

With that out of the way it’s time for me to show some shots from the 1.29 update of ATS and also the FLB that has joined our Lone Star fleet. But the first images belong to Nightshade from our main profile. She bore the brunt of testing out the game after the new changes… 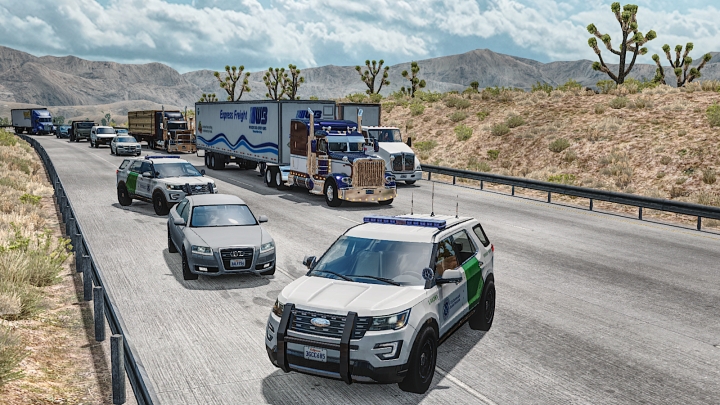 …She’s seen here drifting past one of the new Random Events on I15 on the way to San Diego from Las Vegas with a load of transmissions. Two Customs Cars and an Audi – gotta be a drugs bust?! We continued down the I15 and found that the intersection with the I10 has suddenly grown because I15 now goes all the way down to San Diego…

…That wasn’t there before!!! And a bit further down the road at the junction with I8 we passed the Qualcomm Stadium – home of the San Diego Chargers until this season. I understand they’ve moved up the road to Los Angeles. Such things are frowned upon in the UK where, with a couple of exceptions, a football club is seen part of the community rather than a franchise to move where you will! Don’t worry – we have our own ways of creating football scandals 😉

Nightshade had the honour of the first run into New Mexico as reported in the previous post but in our Lone Star project Midnight Cruiser took the first run for the team. The cargo was Car Parts from Flagstaff to Albuquerque. We received the traditional welcome to a new state – called into the weigh station by the New Mexico police…

…Coming back with a load from Vista print bound for Phoenix. we passed a police car with a pulled over car – officer rendering assistance or a speeder?…

…Then we passed a nasty multi vehicle accident with police, ambulance and fire brigade in attendance…

…These are examples of the new Random Events now in-game since v1.29 was released 🙂

Phoenix offered the chance to buy our third truck for the Lone Star project. Once again this is a slightly older truck unlike my main profile where I will be driving current vehicles. We’ve replicated a 1995 Freightliner FLB with a Detroit Diesel Series 60 500HP engine. She’s got a 13 speed Eaton-Fuller gearbox and a retarder. The paint job is one produced by Lucasi while the truck is the work of Harven and represents the latest iteration in a long history of this mod by a variety of authors over the years. Here she is climbing out of Phoenix with a load of Dried Milk for Alamogordo…

I closed off last time joking about ‘back in France’. I have got some material to relate from there so we will be looking at what my MAN and I have been up to soon 🙂