In Grinding Gears – 2 I reported on our short Scandinavian sojourn and told you that we would be off to Poland next. From our last drop off in Aalborg, Denmark, I picked up a 30ft container of fuel bound for Gdansk. I also took the opportunity to pop to the bank and pay off our loan – that’s €2888 that won’t be going out of the profits each run which should help us get to our initial target of an upgraded garage more quickly. It’s one big step back financially that will allow the steps forward to be much bigger. If you’re playing the game then it’s your choice when and whether to pay off any loans you may have taken out. This left me with around €100k in the bank and the garage upgrade costs €180k.

The satnav offers a route from Aalborg to Gdańsk via Sweden using two ferries. In real time it’s the quickest way as the ferry journeys aren’t a detailed experience. It also costs over €1400 in fares. You can choose your own route and there are a couple of possibilities. You can route via the Odense Bridge which with the tolls will still cost around €1200 and will take more IRL time. Finally you can route overland via Hamburg and Szczecin which avoids the fares/tolls but takes even longer. In game time where ferry journey times are taken into account, the Odense bridge route is probably quickest but I chose to take the long way around down the length of Denmark, through northern German and along the E28 to Gdańsk.

The run through Denmark and Germany was uneventful – just a relaxing drive with a rest stop. From Szczecin we were on the scenic E28 which meanders across northern Poland. The road undulates a lot and after grinding up one quite steep climb we swooped down the other side only to accidentally break the speed limit and incur a €1100 fine from the Policja who had magically appeared right behind me. I’m sure these guys spawn out of thin air! But, that’s my fault for not paying attention 😉 Worse was to come near Gdynia. I was cruising along minding my own business when approaching a junction. There was a gold BMW waiting to turn left on the side road with a stream of traffic coming the opposite way. I’m in the junction still cruising when he comes steaming out of the side road across the front of another truck going the other way and into the side of my cab – talk about stupid, risky manoeuvres! A collision is inevitable in those circumstances. But somehow in the game’s system of justice that is my fault and I get a fine 😦 There was no give way line (I double-checked in case I’d missed it) and I was on the main road. How is that my fault! Actually, afterwards I thought I dodged a bullet there because the damage to my truck was relatively minor and cost €560 to repair. If he’d hit the trailer the cargo-damage fine would have been a lot more.

Eastern Europe in this game seems to be fraught with dodgy driving probably because there is a higher percentage of single carriageway roads. After delivering the previous load I set off for Ostrava in the Czech Republic with a 20ft container of Helium. Just after slowing down at a crossroads I was accelerating away around a bend when I found a car on my side of the road trying to overtake a truck going the other way! I didn’t see her until it was almost too late because she was hidden by the truck. The only way to avoid a collision this time was to take to the grass (fortunately there was no roadside barrier). But the excursion into the rough incurred €890 of damage to the truck 😦 Never a dull moment when the ai is out to get you 🙂

Another quick treatise about trailers – that 20ft length is a pain to reverse because the hinge point is so close to the centre of the overall vehicle length. Unless you have tractor unit and trailer in a dead straight line the trailer will quickly deviate away from the straight and narrow. So you have to be really slow when backing into the parking spot and use only tiny steering corrections. The same is true in ATS for the shorter trailers especially with the Kenworth W900 which is a long old beast! 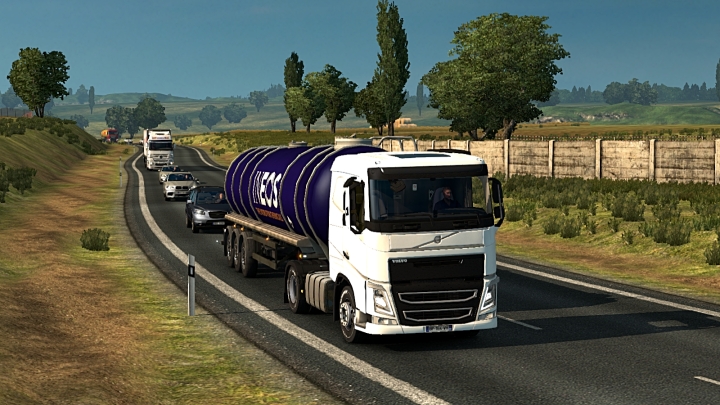 We were actually not going to Praha itself but to Mlada Boleslav 55km to the north and the Skoda car factory. With the game map being 20:1 ratio it just gets counted as part of Praha. That gave me the chance to pick up a Skoda liveried trailer to take some used batteries for recycling in Kraków…

That was another uneventful run and a fitting point to change to American Truck and the most recent journey there.

Last time I had parked up in Primm after delivering solvents to the chemical plant there. Having taken a rest stop I checked out the jobs and found a load of Aromatics going to Bakersfield rail depot. Aromatics? You may well ask – I had to look that one up too! Apparently Benzene and similar Hydrocarbons are Aromatics and have a sweet smell or perfume. Well worth a read on Wikipedia. Anyway, here we are setting off with the evening sun behind us for the run to Bakersfield which was very relaxing after all the trials and tribulations of the roads in Poland 🙂

In the next post we’ll be heading home to France in readiness to upgrade our garage.