That’s one of the catch-phrases of the great entertainer Bruce Forsyth – sadly recently departed. In truck sim, experience points (XP) lead you towards increased skill levels which ultimately reward you with better opportunities to earn money and haul more interesting cargoes. So XP are crucial to your progression in the game.

If you recall my Driver for Hire post in this tutorial series I spent my first skill point after levelling up on distance. Generally, that is seen as being the best choice for your first skill upgrade. As you do more jobs the XP will mount up and you will regularly level up at which point you choose a new skill. In this early part of the game you should be looking to improves all skill areas except for the eco one. To explain why is to go into game mechanics, perceptions of game mechanics and probably why ducks can float too… But I will try explain shortly.

If you’ve read the information pop-ups for each of the non-eco skills you can see the benefits they give which will give an immediate boost to your earnings. When you’re unlocking fragile or high value cargoes, each will give significant improvements to your earnings dependent upon the jobs you take. Be aware of the ADR skills too – these don’t appear to pay extra money and it may seem that all they give is the ability to haul tankers… That’s a wrong assumption – dangerous cargoes pay well! ADR jobs also have bonus XP too. So it’s well worth investing some of some of your skill points in ADR’s. And what trucker doesn’t love the look of a rig and tanker combo?

OK – Eco Points. This is how I believe they work. Remember the settings screen? You could choose the option of Realistic fuel consumption. If you don’t check the option your fuel consumption will be very similar on every journey regardless of cargo weight, engine size and road conditions. In Euro truck I tested this some time back and found that the figure was consistently around 36 litres per 100km. Now the (untested) assumption is that the more Eco Points you have the fewer litres your truck will burn. What happens when you have opted for realistic fuel consumption? On some recent runs with the Renault Magnum using the 480HP Euro 5 engine the consumption varied between 24.9 and 37.5 Litres per 100km and was clearly affected by a mix of cargo weight and the road conditions (and my driving!). I think it’s safe to assume that turning on realistic fuel consumption removes the effect of the Eco Points because logically, if they still have an effect then the fuel consumption is not realistic! Therefore, if you are on the realistic setting, Eco Points are useless to you. Hence my suggestion that you should be selecting other skill areas to spend you points.

That, however, is not the end of the story. In release 1.26 – possibly recognising that most players will be on realistic settings – SCS made the Eco Points apply to any drivers you hire. Now quite how that works I’m not sure since those drivers will build up their own Eco Points over time too! But I guess that if we are going to build a company we’ll need to take that into account and start adding in Eco Points at an appropriate time – possibly from around the point when you buy your first truck as from then you’ll be working towards getting your fleet started.

A final note on XP and Skills.   Each level requires more XP to achieve so your progress will slow a little after the initial rush of levelling-up in the early stages of the game.   The amount of XP you get does increase as a result of your earned skills which mitigates against this to a certain extent but don’t get downhearted when new skills are taking longer to get.   Below is a screenshot of my skills page after the period of driving for hire and the first drive in the new truck I have bought for our nascent company.   I’ll tell you about ‘our’ first truck in the next post of this series. 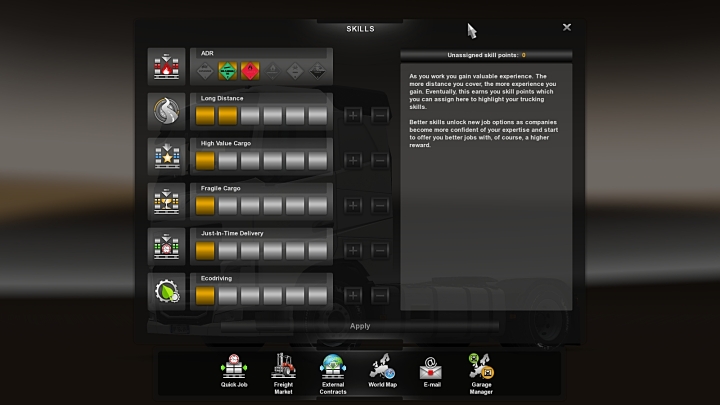