You all know what happens when you scratch an itch right? – you get another itch! I’m happy with my Kenworth K100 in American Truck but there’s unfinished business in Europe. I set off into Scandinavia with my Renault Magnum to complete the sightseeing tour challenge – visit all Scandinavian Cities. Well, we did that and threw in a delivery of Scania Trucks to Manchester with our Renault – that’s thumbing my nose to the Scania lovers 😉 They shouldn’t take it too seriously as I will be driving some Scania’s myself soon to meet another of the in-game challenges. But one thing that I hopefully made clear in my post about the drive up to Stavanger was how I’d grown to love the Magnum despite my initial misgivings about Renaults in general.

Almost all of the trucks in game are currently in production but the Renault Magnum and the Premium are not anymore. They have been superseded by a new design. This happened as long ago as 2013 and yet the Renault Range series of trucks has not found representation from SCS in Euro Truck Sim. Given the hiatus it is hardly surprising that a mod exists for the game which gives the players access to the Renault Range T truck.

However, that mod comes at a price. Several experienced mod makers have got together and formed RTA Mods. They make high quality trucks for both ETS2 and ATS but they charge for their creations. This has been a bone of contention in the community as many feel that all mods should be free. Personally, I feel that if the product is good then the maker has a right to expect payment. A number of free mods that I am using came from people who are now part of this company so I think they’ve earned the right to some of my cash – though I do think the pricing may be a little high. Anyway, it’s a free market – you don’t want to pay, don’t get the truck.

Having bought the mod from RTA, I parked up my Renault Magnum – Un Verre de Corbieres – at my Lyon garage, where she will wait to be driven again in the future, and purchased a Renault Range T with a 520HP Euro 6 engine, 12sp box with retarder and painted her in one of the stock metallic colours. I may choose a different colour later or a specific livery – see below.

Firstly a note on the quality of RTA’s product – when I’m seeing things like the hinges that allow the cab to be tilted forward for engine maintenance then I know there has been a lot of attention to detail. The interior has a couple of very minor ‘straight line’ curves but apart from that looks excellent. The sounds are great and I suspect very close to right – I did do some road review research. The mod comes with a large number of real liveries including one for Red Bull Racing which I may paint her in once the F1 season restarts 🙂 Different interior trims are available too and I guess you pick one that works with your external colours. Engine and gearbox selections are a little limited though I believe that is accurate to the real life truck. Cab options are limited to just the high roof sleeper which is the only real negative of the mod. Overall, initial impressions are very good and I may well be buying other RTA trucks in future.

Stepping into the game, how does she compare with the Renault Magnum and some other vehicles I have driven. First impressions from outside – this is a very tall truck. The driving position is high above the road and gives good visibility. In many ways the designer has retained the distinctiveness that made the Magnum special. This new offering also stands out as a little bit different. The glass area however seems to be less than either the Magnum or the MAN TGX and that gives an impression that there is less space in the cab. And that appears to be the case in real life too. The controls are well laid out and I prefer the dash presentation to that of the Magnum. It still has the single rev counter dial but there is now a large digital speed readout in the centre and an easily readable display of important information like what gear I’m in immediately below!

Driving is a pleasant experience though I find the 12 speed box a little limiting. However, it should be noted that in the real world this is an automatic box and is actually the Volvo i-Shift that Renault refer to as the Optidrive. So driving it like a manual is never going to be quite right! I find the speed in 12th gear to balance out at 70-75kmh which is ok for most of Europe but I may take another look at the drive ratios and tyre sizes in future. It is a shame that the 16speed Manual box has not been included – maybe RTA will add that in an update? She is, as befits a French Truck, wearing Michelin boots 😉

Here are some images of the Renault Range T… 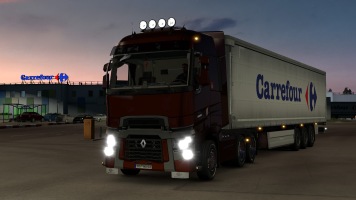