In this first post on my European adventure in Euro Truck, some comment on measurements is required because running around in Europe is different compared to the US of American Truck Sim and the real world experience of driving in the UK. Fuel consumption is measured in miles per gallon on the tally sheet in the UK and the US whilst Europe uses Litres per 100 Kilometres – so more miles per gallon is good and more litres per 100km is bad. Don’t forget that UK gallons are different to US gallons too; so there’s no direct comparison. Weights of vehicles and loads are measured in tonnes in Europe. The UK uses tonnes too, but grudgingly and with a wistful glance over the shoulder at Tons (usually referred to as the Long Ton). In the US the load seems to be measured in lbs (at least in game) – though watching programs like Ice Road Truckers suggests that Tons are used too. Engine capacities are measured in Litres. Horse Power, Kilowatts and Newton-Metres are readily quoted by the engine manufacturers on both sides of the pond; which is understandable in our global economy with the engines being marketed all over the world. Anyway, that’s the health warning for this post I’m driving in Europe and therefore the weights are in tonnes, fuel is l/100km and the monies are in Euros. 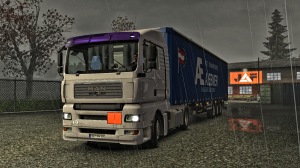 My new truck has 360 horses so I’ve selected a sensible load for the first trip – we’re taking 23t of empty palettes from Dortmund to Kiel. A milk-run along relatively level roads. It’s dusk and raining heavily as we set out. You get used to rain in Europe and driving through the night becomes a routine. In fact it’s so routine that I’ve named my TGA ‘die Nachtschicht’. This trip went well and the cargo was safely delivered with a good fuel consumption of 31.6l/100km.

The next job took me from Kiel to Malmö. There are two ways to get there from Kiel and it’s touch and go which is the best compromise – East to Rostock and then the ferry to Trelleborg. Or north and then across the bridges via Odense and København to Malmö. The ferry will cost €668 whilst the tolls come in at €406 but the fuel costs are higher – take your pick! I went with the bridges on this occasion as I hadn’t done it before and it counts for a background award in the game – not that those matter much to me. I didn’t take any images on this run but I’ll do it again and will make sure I get some to share.

A run from Malmö to Vaxjö with a pressure tank was a nice short trip but I made a mess of parking at a quarry – €463 fine for damage to the trailer. I’m not pleased about that and marked it down as a red delivery. A note on colour-coding – in my Spread sheet log I mark each run red, yellow or green. Red is for runs with additional expenses caused by me. Yellow is for additional expenses caused by the AI and Green is for journeys without any issues. Borderline cases like putting the front wheels over a stop line and getting fined fall into the yellow category – because the game handles those harshly. Apart from the red for making a dog’s dinner of the park in Vaxjö, all my other runs have been green or yellow. No less than 5 of the yellows have been cases of my truck being hit by drivers turning left into me and every time I have been stationary by the time they’ve hit resulting in no blame to me – but I still get to pay the repair costs  Note to SCS – can’t these come out of the offending driver’s insurance? 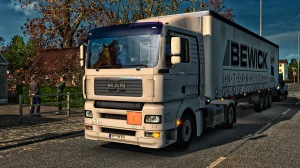 Moving out of Vaxjö and I’m off to Bydgoszcz with a 25t load of Onions. This takes me by Ferry to Gdynia and the infamous traffic lights where I struggled to get an 18t load of carrots moving with the 310HP Iveco in an earlier game save. Once bitten – twice shy… I ran right up to the white line for the lights this time which put the tractor unit firmly on the flat with only the trailer standing on the hill. Pulling away still demanded a lot of clutch feathering but we got away at the first attempt unlike last time. The rest of the run to Bydgoszcz was straight forward 🙂 By the way, if the colours in the screenshots seem a little strange – I’m running an autumn mod which is attempting to produce autumn leaves and autumn light. Let me know what you think 🙂

I’ll cover some more trips in the next post – see you all soon!