The Pacheco Bar was typical of bars on small stations – coloured lights above the counter and lots of gloom elsewhere. The gloom usually affected the mood of the clients too. In fact, Gloom was a great adjective for outpost bars! The corridor outside seemed bright to me when I walked in! A small group of miners were playing cards at one of the brighter tables – they gave a quick appraising glance as I walked in. The slaves I’d seen in the cafeteria were there too – a dark corner table offered them some form of security. I’d met the station security officer and he didn’t seem the type to pursue minor criminals, so I guessed they were safe enough for now but I suspected it wouldn’t protect them if the ISS had a purge.

The thing that threw me was the presence of Cartographer Millard at the bar. She’d ditched the check jacket as well as her glasses. Her brown hair was down, draped across her shoulders and she was wearing a grey jump-suit with pale blue flashes. A couple of young lads at the other end of the bar kept glancing at her but she could have had a force field around her – they were frightened to even say hello.

I targeted the open counter area between them and caught the bartender’s eye. “Malt and water please.” I asked. “Only got sim-Malt Pilot – that ok?” “Have you got anything non-sim?” I asked – “Just beer – brew it ourselves.” “Ok – gimme a beer for now.” I looked for a stool – there weren’t many of them and the only free one was next to her. “May I?” She nodded with half a smile.

So we sat in silence – a silence that drowned the music in its depth. One of us would have to speak and she cut through the ice… “Still here Commander?” “Waiting for the maintenance people.” I replied… “Can’t move ‘til then.” We both lapsed into silence while we pondered my words. I looked at my glass as I watched her in my peripheral vision. Then I pushed the barrier a bit – “Cartography busy here?” “It can be but it’s more quality than quantity.” She replied. We talked some more about business then she proffered her name – “I’m Amanda but my friends used to call me Mill’s”. I noted the ‘used to call’ bit – she was lonely here. “Your friends at college?” “Yes, it seems a long time ago now.” She looked me full in the eye and asked – “What’s your name then Commander?”

“You already know… It’s Anson.” She gave me a sideways look – “…and?” Then I knew I couldn’t phase this lady – only honesty was going to carry the day. “Ok – My name is Anson Twenty-Two or Anson Two-Two. Take your pick – I’m the 22nd Anson clone.” “You’re a clone?” She said it in a vaguely surprised rather than shock-horror manner! The evening temporarily descended into question time – had I ever met any of my brothers – “No”. “How many Anson’s are there?” she asked. “The law limits the number of any clone to 50 because of genetic degradation risks and most individual clones stop at 35 specimens. I think that was the limit for us.” “Are you all still alive?” “ I don’t know – we were all sent our separate ways several years apart.” She was intrigued but not overawed. “Are the others pilots too?” “Probably, but not necessarily…” I replied.

Conversation drifted away to where I’d been and what I’d done. After I told of the journey across the galaxy from LHS 3447 she expressed embarrassment that she was only a couple of systems from where she was born. Then she caught my eye – “There’s only miners here.” She said. It was the strangest come-on I’d ever experienced! I looked into those deep brown eyes and I was hooked. After that it was inevitable that we would go to bed. Lonely in the depths of unforgiving space, we both needed each other. Hers was a controlled warmth which put my lust to shame. But we found a loving balance at the second attempt.

The next day we moved my kit into her room – it was drier than mine! We met for the next three evenings in the bar and shared the nights together. I always thought we both understood that I would be moving on and she confirmed that when she asked “What will you do next – More exploring?” “I see there’s a smuggling operation going on – money to be made there but lots of risks involved. Then again…” I said – “I’d like to push on with my exploration – go down below the galactic plane again.” “If you do that – will you sell the data here?” she asked. “Yes” I said – though I don’t know that I really believed that at the time.

We parted the next morning. The other lady in my life – Humourist – wanted my attention. I wandered down to the Pilots Briefing Room and checked the space weather again – it looked fair and I was running out of excuses not to go flying. I was surprised to find the Security Officer standing by the gate as I walked down towards the ship. “You coming back here Commander?” He asked. “Possibly – depends on where the galaxy takes me.” I replied. “Give me your hand!” He grasped it before I had a chance to respond and pulled it towards him, baring my forearm. “This will hurt Commander…“he stabbed down with something that looked like a battery pack. I felt a sharp pain in my forearm and then I was free. “What the…?” He looked a little embarrassed but also in command of the situation. I looked at my arm and saw that there were 2 green dots above the wrist. “I’m sorry” he said “she needs to know it’s really you when you come back!” “Just who are you!?” I asked. “Her Father!”

So here I am a week later sitting out in 104 Aquarii looking at some of the beautiful sights and still seeing her deep brown eyes and that hair that flows like a waterfall. It’s feeling like decision time for me. Perhaps I can buy some time – 107 Aquarii would be a good detour! 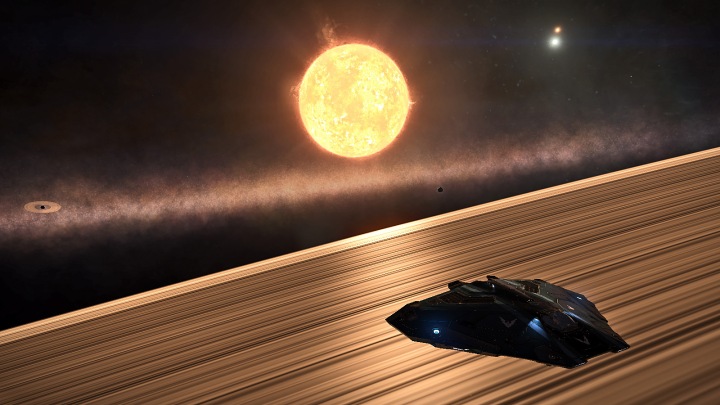 I popped back to Malcy’s maintenance after breakfast to get an idea on how long the repairs to Humourist would take. Old man Malcy said “7 days… 5 at a pinch. It depends on some parts I need for your frame-shift drive. I’ve ordered them in from HR 394 – they should be here tomorrow.” “Ok” I said, feeling a bit depressed, “No rush.” He grinned – “I know you’d rather be out there but I’ll do you a proper job! Safety first…Yes?” “Yes” I agreed. “Your AFMU needs work too. We can’t do that here so you’ll have to go to HR 394 yourself for that.” – He added.

I mooched around Pacheco Outpost – there was nothing to do. The big Orbis and Ocellus star ports had shopping malls and entertainment for the partners of naval personnel, diplomats and just about anyone else. There was nothing here at Pacheco except the fly-blown canteen, a small general store and a bar. I popped into the Pilots Briefing Room only to find it empty – the miners already knew everything about their system and any explorers would be going into the unknown anyway! I pulled off the latest space weather sheet just to show good form along with the details of HR 394.

Over the next couple of days I got into chats with some of the miners in the cafeteria. Miners are a suspicious bunch – newcomers are not welcome – more miners means less profit to go around. Eventually I convinced them that I was exploring and had no intention of mining… “Cobra’s no good for mining anyhow.” I said. That drew some sage nodding of heads. Then one of the younger miners offered me a run out to the resource site on the belt around the gas giant. It was good to get away from the confines of the station into the open space outside. He was flying an Asp named ‘Cheese Grater’ – his Father’s old ship– and he handled it well. As we moved in close to the rock field surrounding the planet I caught a glimpse of a slim dark ship sitting tight to some rocks in the planet’s shadow. “There’s someone over there!” – I pointed in the general direction. “That’s a bounty hunter doing protection for us.” “We all pay a percentage of our profits to hire them – the law can’t keep the pirates away so we have to look out for ourselves!” He got on with mining the ore and I stared at the rocks drifting past a lot closer than I usually like to see them.

I thought I should check the pirate situation before setting out again when Humourist was fit, so next day I decided to pay a visit to the Security Office. I found it on another dull corridor close to the maintenance office. “Come ahead!” was the response when I knocked on the door. I was greeted by reflective shades peering at me from behind a pair of well-appointed boots resting on the desk. The boots told me this was an Elite pilot – they were synonymous. “You here to claim a bounty or pay a fine?” “Neither, I’m passing through and wanted some security info regards pirates.” He eased his shades up over his eyes – “What sort of work are you doing?” He asked. “I’m exploring – just passed through dropping off data and going out again when the ship’s been cleaned up.” “I heard there were pirates here and, as I have to pop over to HR 394, I thought I’d better check.”

“We do get pirates here”, he said, “but not so you’d notice. They’re all third rate. You want pirates… Go over to Ilmeno – they’ll shred you!” “What about HR 394?” I asked… “Some over there but no real bad boys.”, He replied. “The local miners here think they’re not getting protection.” I said, “I see they’ve employed a bounty hunter. Is that something I should worry about?” He burst out laughing and then composed himself to look serious… “You know what I’ve got to protect these people? Two young kids who scraped Mostly Harmless on the last Pilots Federation test. They’ve got Vipers and they’ve got enthusiasm. But that’s about it. I told ‘em – stick together and be prepared to run away – they’re no good to me dead. When it gets bad, I go out there myself and sort it! Hell! I bet you’re ranked at least Competent and probably higher – I’d sign you up tomorrow but I don’t think that’s your thing!”

“You’re right”, I said – “Not my thing… at least not yet. Maybe in the future?” I glanced up at the wall and the piece of fuselage hanging there – nose art of a horned pig firing a very large weapon. “Yours?” I asked. He nodded slowly – “A long time ago – a piece of the past – now I keep the law.” We parted company and I went to seek solace in the bar.