The Rail Enthusiast and the Birder are very similar at the basic level – though I’m sure that statement will have aficionados of either hobby throwing up their hands in protest. So let me highlight the similarities.

Both hobbies are essentially observational in nature. Apart from having the power of sight the budding Train Spotter or Bird Watcher will need a Pencil/Pen, a Notebook and a book that helps them identify what they have seen.

Train Spotters will buy a ‘Combine’ (officially ‘UK Combined Volume 2014’ for example) – a book that lists all the locomotives, multiple units, carriages and track maintenance vehicles in the UK. Why Combined? – Each section could be purchased separately in the past. There are a few Combines available but they all display the same information. Only the format and photographs illustrating the classes change between different publishers. Combines are published annually to maintain some semblance of the data being up to date – which it rarely is! 😉

Bird Watchers buy a Field Guide – there are a plethora of these though buying one covering ‘The Birds of Southern Africa’ when you live in England would be somewhat perverse. I mention that one because I have a copy 😉 No, the UK Birder has to choose between guides that cover the UK only, Britain and Europe or Britain, Europe and North Africa. You can choose to buy a guide to garden birds but that would be somewhat limiting!

Field guides vary with publisher. Some use drawings to illustrate the individual birds whilst others use photographs. Each style has its advantages and disadvantages and it is up to the individual person to choose which best suits them. It would be nice to say that a field guide is for life, after all birds don’t evolve much over a human lifetime do they? That’s true – but scientists continue to revise their opinion of which birds are related to each other and this results in scientific name changes at regular intervals. A good example is one of Britain’s commonest birds – The Black-headed Gull. Additionally, new species may establish themselves after the field guide has been published – a UK example of this is the Ring-necked Parakeet.

So, what else does the beginner need? Somewhere to watch their chosen quarry! A piece of railway line would do for both as pointed out in my previous hobbies post but in reality the newbie Train Spotter normally heads for their local station as a starting point whilst the Bird Watcher could start at the kitchen window watching the birds in the garden. The other thing common to both hobbies is the need for good wind and waterproof clothing. Devotees of these hobbies will spend a lot of time out in bad weather. Actually, the same is true of watching non-league football but let’s not go there 😉

The first real difference at the basic level is binoculars… These are almost essential for the Bird Watcher but are only a ‘useful addition’ for the Train Spotter. Which binoculars to choose is also a difference between the two hobbies. For general birding a pair of good quality 8×40 is widely recommended – magnification being traded off against field of view, closeness of focus and quality of optics. The Rail enthusiast will generally opt for 10×50’s or 12×50’s – magnification v being able to hold them steady being the main criteria. Why the difference? Birds are small and flit around woodland quite close to the observer – Trains hide in the middle of large railway yards a long way from the observer but at least they don’t flit around 😉

So there you go, a beginners guide for two hobbies that are both pleasant and relaxing excuses to get out and about 🙂

…is another club’s gain 😦

When I wrote “We have a small budget compared with many other Ryman League clubs and spending to stave off relegation would have been foolhardy – that path leads to ruin and the death of a club. Everyone knows the tale of Fisher Athletic. I may have appeared to be showing prescience in the light of the news that Worksop Town FC have subsequently resigned from the Evo-Stik League. In truth I don’t have a crystal ball but in the last week of the regular season the rumour mill was alive with stories of the possible demotion of Worksop Town amid suggestions that they were likely to lose their main source of financial support. That is as far as it went at the time and I think we assumed that it was purely speculation. Wingate’s fans, by and large, took our relegation on the chin and were not surprised to find ourselves back in the Ryman Division 1 North.

Then, on May 21st it was announced that Worksop Town’s Owner Jason Clark was leaving. The news prompted a statement from the club which included an emphasis on the club’s financial status as being debt free following Clark’s period of tenure and announcing that there would be further meetings to discuss the way forward for the club. In the context of that statement it must have come as a shock to the club’s loyal fans to see a statement on May 24th announcing that the club had resigned from the Evo-Stik League as attempting to fund playing at that level would incur losses. Subsequently following at least one emergency meeting an attempt to withdraw the resignation was made on May 26th which the Evo-Stik League board rejected as the resignation had already been notified to the FA as a matter of urgency “due to the knock-on implications of club allocations across Steps 3, 4 and 5 of the National League System.”

For those of you wondering how the resignation of a team somewhere in the industrial wilds of Nottinghamshire affects the status of a team playing in one of the leafier suburbs of London, re-read that quote from the Evo-Stik League Board. In the professional leagues there is but a single structure allowing simple up-down movement between the Premier League, The Championship, Leagues 1 & 2 and the Conference Premier. Below this level the number of teams qualified to play at each step of the football pyramid is too many for a single division structure so, the Conference Premier is fed by the Conference North and South divisions. And so the Pyramid broadens as you descend to the base – You can check out the structure at http://en.wikipedia.org/wiki/English_football_league_system. For the record, Wingate & Finchley were in the Isthmian League Premier Division last season and were relegated to the Isthmian League Division One North – though we could equally have found ourselves in Division One South!

Now, while I have been writing this, confirmation has been sent to the Isthmian League by the FA that Wingate & Finchley are reprieved – you can read the statement at http://www.isthmian.co.uk/blues-reprieved-after-second-reshuffle-19724/ and see how that decision to reprieve our team was reached. Will that be the end of the matter? Who knows, but Worksop Town were said to be considering appealing the Evo-Stik Board’s decision not to allow them to rescind their resignation. I’m not sure what grounds that appeal would have – it’s not like appealing against something that was out of your control.

While this reprieve is great news for The Blues it brings with it a degree of responsibility – responsibility to prove that we do deserve to be in the Ryman Premier Division and that means upping our game from last season. There is no room for complacency (or Swans for that matter!) and I note from our news pages that two new strikers have been added to our ranks over the last couple of weeks. I don’t doubt that the Skipper will be driving the team on to get results 🙂

To conclude – I must tender my sympathies to the fans of Worksop Town and wish them well for the future. It is a salutory lesson regarding clubs relying on a single benefactor – something which happens all too often in the non-league set-up. Who knows where their club will be slotted back into the pyramid but hopefully it will thrive and climb back up the tables – they have the experience of the likes of Maidstone United to draw strength from.

What goes around, comes around… Or so we are told. A couple of years after returning to my first hobby and rediscovering the joys of rail-enthusiasm, another of my interests has regained momentum. Unlike trains, where the interest was very muted between the end of the 1980’s and a couple of years back, this interest has always been there in my house and garden. It is, of course, my love of birds. I’ve kept Budgies since I was in primary school. But my interest in wild birds really started in the mid 1970’s as a direct result of my interest in trains!

This may seem strange to those who have never pursued the iron horse but actually it’s quite a logical progression. When you move from standing on main line stations and start to visit locations to photograph trains passing through the countryside you spend quite some time between photo opportunities during which nature claims your attention. It was often said in the past, and I suspect that it remains a truth, that the railway network is the UK’s largest nature reserve. It is a very particular reserve – you are unlikely to see Ducks and Geese waddling along the ballast. You will see Blackbirds and lots of smaller birds flitting across the tracks between trees on either side and you note that they somehow seem to have learned when trains are likely to appear – it tends to go quiet before a scheduled movement. You will certainly become familiar with most species of Crow – Carrion Crows, in particular, will scour the tracks for anything including the items flushed from the toilets of a passing train 😦 I can remember a tale about a High Speed Train hitting a cow somewhere between Swindon and Didcot – I bet the Crows descending on the tracks behind that train thought Christmas had come early 😉 Gulls play with trains – at Taunton on one occasion I remember the result was Class 50’s 1 v Herring Gulls 0. The Gull didn’t get out of the way in time and was killed by the pressure wave in front of the speeding locomotive. So, in the mid-1970’s I joined the RSPB and have been a member ever since. Ok – enough of the past, what of the present?

It started with a trip to Manningtree in mid April. The idea was simple… Get Alasdair out for a walk in the countryside, get some haulage and photos of Class 90’s on the Norwich services and cover some grid squares for the Geograph project. Birdwatching was mentioned as a hook to encourage Alasdair – he enjoys seeing birds in the wild. Oh! and we also get to visit Flatford Mill in Constable Country too 🙂 What ensued was a very enjoyable day out despite the weather turning overcast and drizzly towards hometime. The Bird side of the day was, I think, a moment of connection between father and son. We tried this 3 years ago at Loch Leven and Vange Marshes but I felt his interest was passing. This time there seemed more of a connection. We didn’t see anything rare that day at Manningtree but the Lapwings displaying over the wetlands of the estuary, a Redshank and our first Swallows of the year did seem special in their own way. The sudden shock of a Pheasant bursting from almost beneath our feet to glide majestically across a field of yellow Rape before settling a hundred yards away was also something special. The scene was set – I would return to birding but this time I’d be taking it seriously. Time to start that Life List and probably a few other lists besides 😉 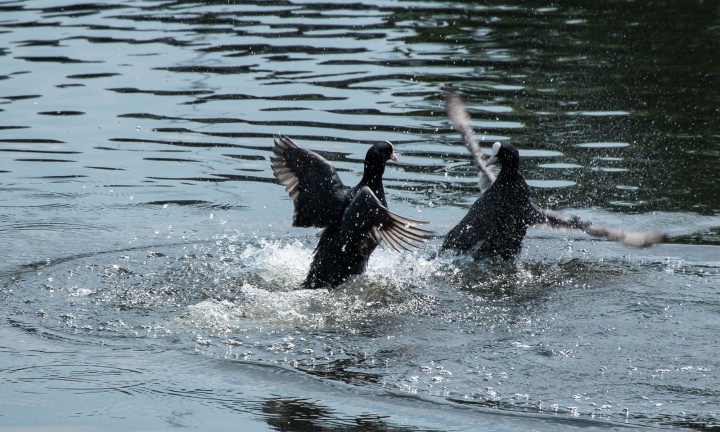