There are a number of sayings regarding overtime in the company I work for. One is “The Lord giveth and the Management taketh away”. On another occasion I can recall a colleague saying that we’d “taken so many swipes at the golden goose that we’d Killed it”. With that in mind, let me tell you a story…

I feed the birds in my garden. I’ve been doing it for years and I’ve always enjoyed watching a growing number of species turning up to eat what’s supplied. Around 5 years back I moved the feeding station up to the first floor because of the nuisance caused by my neighbours Siamese Cats – I’m not about to provide a free kill-zone for burderers.

The new arrangement worked well. The new seed feeder was quickly rediscovered by the Tits, Finches, Sparrows and Robins as were the peanuts by the Tits and Great Spotted Woodpeckers. I also used to put some feed on the window sill in the hope that the Starlings could take advantage and they sometimes did. I originally used a mixed table feed provided by CJ Wildlife – a company from whom I always buy my feeds and whose products I highly recommend.

After a short while the Pigeons moved in and I’d be first to admit that I wasn’t too bothered – I checked and they were all clean birds with no sign of foot rot (I dust the perches and window sill regularly with anti-fungal treatment anyway). However, their presence started to get a bit ‘oppressive’ and was possibly intimidating some of the smaller species so back I went to CJ’s website and chose a seed mix that was designed to be less attractive to Pigeons – lacking wheat and similar items. I had to contact CJ Wildlife a little while later to tell them that actually, my Pigeons were loving the new mix. Our conclusion was that we had a new sub-species of Pigeon in Finchley, the Gourmet Pigeon!

I stopped putting feed out on the window sill except for a very small amount at the start of the day which the pigeons would wolf down. After that, the seed feeder / peanut feeder would be the only available food resources and ideal for the smaller birds. And that should have been the end of it. But no – next thing I find is that one enterprising Female Pigeon has taught herself how to hang by a claw from the perch and flap her wings whilst stealing seed from the feeder! This was a couple of summers back. This spring I now find that I have the same female and 3 young birds, whose plumage clearly indicates that they are her children, pulling the same stunt. There must be some learning ability in her genes that she has passed on! Now, with the seed disappearing at an alarming rate, something had to be done 😦

I have now purchased a cage that sits around the feeder and only allows small birds passage. Once again it was purchased from CJ Wildlife and, as an example of the speed of their service, I ordered it mid-morning and the delivery man was knocking on my door at 07:30 the next day. Their deliveries almost always turn up next day including one I’d ordered after 6pm the previous evening! That’s excellent service if you don’t mind the delivery man seeing your pyjamas 😉

The cage initially caused some consternation amongst the small birds – there were a number of initial visits that were just about looking from the branches of the Rowan tree. Then the first bird approached. Typically it was a Greenfinch – nothing keeps a Greenfinch from seed 🙂 The Lady Greenfinch took a minute hanging onto the bars outside before working out how to step through onto the perch inside so she could eat. Fast on her heels were the Coal Tit and Blue Tit, neither of whom seemed to realise that the additional barrier was there!

The most inconvenienced of the regular small birds were the Sparrows and the Robins. Mrs Robin flew up on a number of occasions but was not sure what to do – her approach is always direct to her target whether it’s to capture an item of food or to chase off a potential suitor. It took her several approaches over half a day to work out a method whereby she could enter successfully. The same was true of the Sparrows though in their case it was more about solving the problem of entering whilst clinging to the vertical bars rather than the horizontal ones – it took them over a day to work it out!

Sparrows and Greenfinches are just about the largest birds that can enter the cage. That doesn’t stop the Pigeons from trying though! I’ve seen all manner of attempts to access the food through the cage and they can get tantalisingly close but they just don’t have that extra half-centimetre to reach the seed in the feeder! And, because of the persistence, I’ve had to take the decision that I won’t be feeding them at all in future. So there’s some pretty pecked-off Pigeons hanging around outside at the moment. I’m almost at the stage of expecting them to don Trilby hats and confront me with a Chicago Piano. They look through my office window with a piercing stare – If you haven’t experienced the two golden-orange eyes peering at you along a chiselled beak then you won’t understand how pointed that look is! But all I can say is – you brought it on yourselves Piggies. You’ve taken too many swipes at the Golden Goose and you’ve killed it! At the end of the day…

Pigeons = Green Status. Sparrows = Red Status – Major population decline and I have witnessed it. Now is the time to support those species under threat and I’m sorry if it pecks-off the local Pigeons 🙂 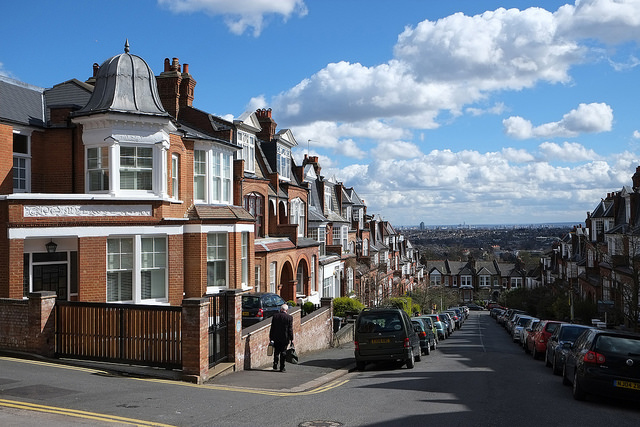 The top image is a view from Muswell Hill looking towards the Olympic Stadium at Stratford. The lower view is from Parliament Hill and takes in the City of London.

You can read about the weekly photo challenge at – http://dailypost.wordpress.com/dp_photo_challenge/on-top/

There are grand monuments all around; Monuments to battles, heroes, etc..

On 8th October 1952 in the second worst disaster to occur on the UK railway network, the 7:31 Tring-Euston commuter service standing in the up fast platform with 800 passengers aboard was struck in the rear by the late running Perth-Euston sleeper running at between 55 and 60mph which had passed a colour-light distant signal and two semaphore signals at danger in patchy fog. Although the area signals were immediately returned to danger by the signalman at Harrow it was too late to prevent the 8am Euston-Liverpool express from colliding with the wreckage of the initial accident at around 60mph resulting in many additional casualties. The reason for the Perth express passing the signals was never established as the driver was amongst those who perished.

This weekly photo challenge can be found at http://dailypost.wordpress.com/dp_photo_challenge/monument/ .