It has been remiss of me – I haven’t been keeping you up to date with the football; failing to cover the Touchline element of my blog’s tag line. Truth be told, there hasn’t been a lot of telling to do. Winter – or more importantly the lack of it – has decimated the fixture list since the first postponements due to waterlogged pitches began in early October. Sure, there have been periods where games have gone ahead as normal but since Christmas very few have been played and there is quite a backlog. On average, most teams still have 20 matches to play in the league from a season total of 46 and only 13 Saturdays left until the official end of the season to play them on. Matches get moved to Tuesdays but these are being postponed also. In the middle of this, there are also ongoing cup competitions so some teams still have additional fixtures to fulfill there too! One wonders how many matches these amateur/semi-pro players will be expected to play in the closing weeks of the season if the Ryman League bosses stick to the end of season dates like they have in the past 😦

It has been so bad this January that the unthinkable occurred on the 4th when Wingate & Finchley’s home game against Wealdstone was postponed due to a waterlogged pitch. ‘Never in the field of humans conflict has so…’ Oops, wrong speech 😉 Never, in current memory, has a game at Summers Lane been called off for that reason! Frozen Pitch, Snow, Five players sent off… But never Waterlogging. The water flows off the pitch and down across the Glebelands to the river valley – otherwise known as the North Circular Road – below. The Groundsman suspects that something large has died in the drainage system at the south end of the pitch – possibly one of those players who appeared in a couple of games last season but hasn’t been seen since. The Police were noted outside the ground last Saturday but fortunately they were checking for speeding motorists rather than missing footballers.

Apart from that shock on the 4th, the Summers Lane pitch has stood up well and the team have played 5 Home matches starting with Hendon on Boxing Day. But only one away match has been completed in the same period leaving Billericay and Kingstonian to be rescheduled, joining Carshalton and Grays in the waiting room. The Blue’s have struggled against some of the better teams in the league over the period though there were signs of improved performances and perhaps better results to come. The local derby against Hendon on Boxing Day was a 1-0 win – it’s great to put one over our rivals and it marked the debut of new signing Adam Bolle who scored the winner. The game also saw a debut for 18yo Jack Read (immediately christened Nipper) and the return of Lewis Jones from long term injury. It was a Lewis cross that Adam Bolle converted, so an assist on his return 🙂

Then began the long wait… It wasn’t until Tuesday 14th that we met Maidstone United at home in a rescheduled game. This match saw another new signing in the form of Ola Sogbanmu who looks likely to play in the midfield but started up front on this occasion. We lost 4-2 with Ola Sogbanmu scoring both goals but it could so easily have been 3-3… referees and penalty decisions. The Maidstone 4th goal came from a penalty that was given when one of their players went down in the box in a manner more at home in a John Wayne western than on a football pitch. Videos of the event apparently don’t show any contact with the player 😦 At the other end, a blatant pull back of Leon to prevent him getting to the ball before the Maidstone keeper went unpunished!

The following game against Leiston was a tight affair finishing 1-0 to the visitors. Again, it could have been 1-1 with Hector Morante being upended in the box in the last 5 minutes – you can see the photo of that one and judge for yourself. Last time I looked, grabbing an opponent round the throat is foul play but the referee didn’t think so 😦 Referees… Don’t you just love them! The Leiston game was sad for another reason. It marked the last appearance of Leon Smith in a Blues shirt. He has gone to Hendon in the hope of getting more football. He holds the record for most goals scored by a Wingate & Finchley player at 110 and I wish him and his family well for the future – it will seem strange photographing him wearing a green shirt next time we play Hendon.

The team travelled to Hampton and Richmond on the 21st and were defeated 2-0. It’s always a difficult place to go and I don’t think the fans expected to get much from that one. I didn’t attend as I currently don’t want to be too far from my wife – so it’s home games only for the time being. That brings us almost up to date. I’ll report on the Thamesmead Town game and the cup match against Redbridge in the next post. In the interim, here are some photos from the matches reported above… 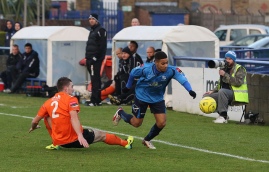